What in the world is 'Doctor Who'? 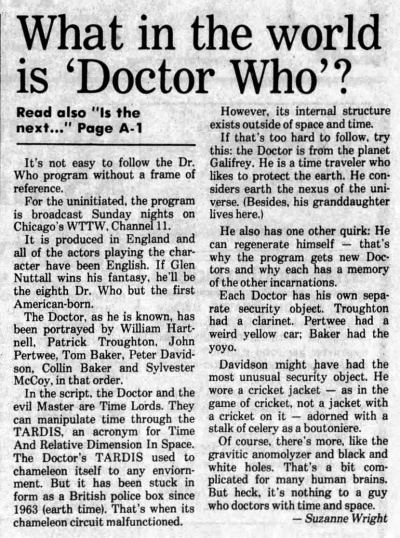 It's not easy to follow the Dr. Who program without a frame of reference.

For the uninitiated, the program is broadcast Sunday nights on Chicago's WTTW, Channel 11.

It is produced in England and all of the actors playing the character have been English. If Glen Nuttall wins his fantasy, he'll be the eighth Dr. Who but the first American-born.

The Doctor, as he is known, has been portrayed by William Hartnell, Patrick Troughton, John Pertwee, Tom Baker, Peter Davidson, Collin Baker and Sylvester McCoy, in that order.

In the script, the Doctor and the evil Master are Time Lords. They can manipulate time through the TARD IS, an acronym for Time And Relative Dimension In Space. The Doctor's TARDIS used to chameleon itself to any enviorn-ment. But it has been stuck in form as a British police box since 1963 (earth time). That's when its chameleon circuit malfunctioned.

However, its internal structure exists outside of space and time.

If that's too hard to follow, try this: the Doctor is from the planet Galifrey. He is a time traveler who likes to protect the earth. He considers earth the nexus of the universe. (Besides, his granddaughter lives here.)

He also has one other quirk: He can regenerate himself — that's why the program gets new Doctors and why each has a memory of the other incarnations.

Each Doctor has his own separate security object. Troughton had a clarinet. Pertwee had a weird yellow car; Baker had the yoyo.

Davidson might ,have had the most unusual security object. He wore a cricket jacket — as in the game of cricket, not a jacket with a cricket on it — adorned with a stalk of celery as a boutoniere.

Of course, there's more, like the gravitic anomolyzer and black and white holes. That's a bit complicated for many human brains. But heck, it's nothing to a guy who doctors with time and space.