What is a Dalek? 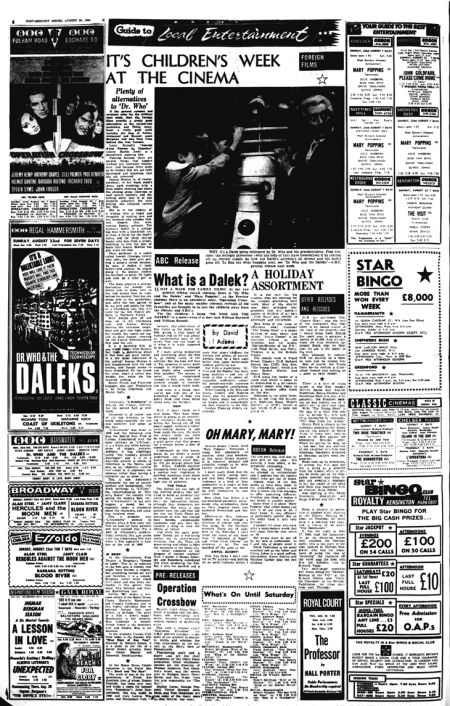 WHAT A WEEK FOR FAMILY FILMS: At the two general release circuit cinemas there is "Dr Who and the Daleks" and "Mary Poppins", at the Preview cinemas there is an adventure story, "Operation Crossbow", and at the many smaller cinemas revivals of old favourites are brought in to lure the children away from the Odeons and A.B.C.s.

For the children, I think "DR WHOL AND THE DALEKS" is a must — even if it does lack William Hartnell and William Russell.

Actually, the substitution of Roy Castle as Ian makes the film, giving it that touch of humour that on TV was almost an unintentional part of the series. Now you can laugh at it when it is really supposed to be funny.

The story, acting, production story and everything about the film is, of course, corny in the extreme. But the kids will love it. The suspense is never quite enough to frighten, although you might allow yourself a little shudder. The science is never really complicated enough to bore you, but nonsensical enough to convince you that it would really work.

And what is a Dalek, once you've got him out of his protective case? (I hope you didn't think that those metal cones were the Daleks!)

Well, I don't think we'll ever know. They blow themselves to pieces in an electrifying (literally) finish — but not before Ian, having cut off the power supply, removes a rather nasty-looking bundle of ugh from inside the cone. We don't see what's inside the cloth he wraps around it, except for a scaly green claw that gropes for a minute before it dies of exposure.

Underneath all this hocus-pocus do we detect a moral undertone, nay a sense of moral commitment even? Maybe For the strange planet that Dr. Who's TARDIS machine transports them to has suffered a nuclear war: vegetation is petrified, mutations crawl about in swamps, and the air has a high rate of pollution.

The Daleks are one side of the warring peoples that survived to build an all-metal city where they could live safe from the radio-active fallout, although they themselves are mutations. But there is also another race, the side that lost the war, the Thals. These are mutations as well, But instead have become exceptionally handsome and also have discovered a drug to cure the effects of fallout.

And while the nasty, gruesome Daleks are a war-loving nation, ought to ex-ter-min-ate everyone else, the Thals are peace-loving and refuse to fight the monsters in the metal city.

A bitter comment on the dangers of nuclear war? Well, I doubt if Messrs Subotsky and Rosenberg considered this when producing the film. But a plea for pacifism and a story that shows children the horrors and effects of nuclear war for must be a darn sight better than some better-made rubbish glorifying war.

Far from a masterpiece, "Dr. Who and the Daleks" has many good qualities - and one of them is that it is, above all, enjoyable, inoffensive, colourful, pseudo-scientific nonsense - and thoroughly entertaining.

Peter Cushing as Dr. Who and Jennie Linden and Roberta Tovey play his grandchildren. Roy Castle plays Ian strictly for laughs and is undoubtedly the best character in the film.