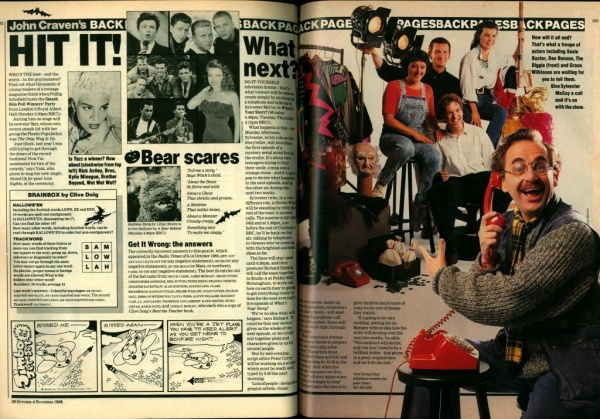 DO-IT-YOURSELF television drama - that's what viewers will be able to create simply by picking up a telephone and talking to Sylvester McCoy in What's Your Story? (Monday 4.40pm, Tuesday-Thursday 4.15pm BBC1).

What happens is this - on Monday afternoon, Sylvester, in his role as the Storyteller, will introduce the first episode of a mystery serial acted live in the studio. It's about two teenagers trying to find their uncle, a map and a strange stone - and it's up to you to decide what happens in the next episode, and in the other six during the next two weeks.

Sylvester (who, in a very different role, is Doctor Who will be standing by with the rest of the team to answer calls. The number is 021-432 5432 and at 5.30pm, just before the end of Children's BBC, he'll be back on the air, talking by telephone to viewers who've come up with the brightest and best ideas so far.

The lines will stay open until 6.30pm, and then producer Richard Simkin will call the team together in Studio A at Pebble Mill, Birmingham, to work out how on earth they're going to get everything ready in time for the next evening's live episode of What's Your Story?

'We've no idea what will happen,' says Richard. 'It could be that one viewer gives us the whole of the next episode, or we could mix together plots and characters given to us by several people.

'But by mid evening, script editor Peter Corey will be working on a script which must be ready and typed by 8.00 the next morning.

'Lots of people – designers, graphic artists, visual effects experts, make-up artists, painters, carpenters, and many more – will start putting those phone-call ideas into action. Some will have to work right through the night.

'Most television dramas take many weeks to prepare and we have only a few hours. The actors must learn their lines quickly and be rehearsing by 10.00 in the morning. And when the episode has gone out live, we start all over again when the phones being to ring!'

Richard say the idea is to give children much more of a say in the sort of drama they watch.

'It's going to be very exciting, setting out on Monday with no idea how the story will develop over the next two weeks,' he adds. 'The audience will decide, and you don't need to be a brilliant writer -just phone in a good, original idea and we'll do the rest.'

How will it all end? That's what a troupe of actors including Susie Baxter, Ben Benson, Tim Diggle (front) and Grace Wilkinson are waiting for you to tell them. Give Sylvester McCoy a call and it's on with the show.