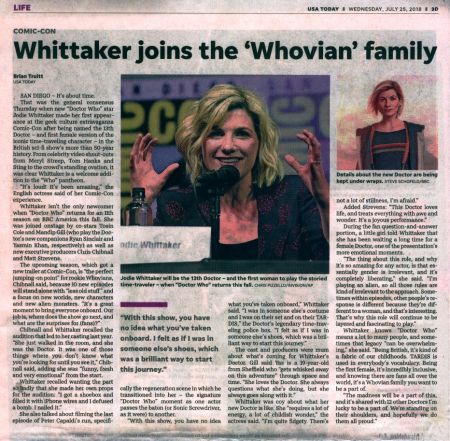 SAN DIEGO - It's about time.

That was the general consensus Thursday when new "Doctor Who" star Jodie Whittaker made her first appearance at the geek culture extravaganza Comic-Con after being named the 13th Doctor - and first female version of the iconic time-traveling character - in the British sci-fi show's more than 50-year history. From celebrity video shout-outs from Meryl Streep, Tom Hanks and Sting to the crowd's standing ovation, it was clear Whittaker is a welcome addition to the "Who" pantheon.

"If s loud! It's been amazing: the English actress said of her Comic-Con experience.

Whittaker isn't the only newcomer when "Doctor Who" returns for an llth season on BBC America this fall. She was joined onstage by co-stars Tosin Cole and Mandip Gill (who play the Doctor's new companions Ryan Sinclair and Yasmin Khan, respectively) as well as new executive producers Chris Chibnall and Matt Strevens.

The upcoming season, which got a new trailer at Comic-Con, is "the perfect jumping-on point" for rookie Whovians, Chibnall said, because 10 new episodes will stand alone with "less old stuff" and a focus on new worlds, new characters and new alien monsters. "If s a great moment to bring everyone onboard. Our job is, where does the show go next, and what are the surprises for (fans)?"

Chibnall and Whittaker recalled the audition that led to her casting last year. "She just walked in the room, and she was the Doctor. It was one of those things where you don't know what you're looking for until you see it: Chibnall said, adding she was "funny, fresh and very emotional" from the start.

Whittaker recalled wanting the part so badly that she made her own props for the audition: "I got a shoebox and filled it with iPhone wires and I defused a bomb. I nailed it.

She also talked about filming the last episode of Peter Capaldi's run, specifically the regeneration scene in which he transitioned into her - the signature "Doctor Who" moment as one actor passes the baton (or Sonic Screwdriver, as it were) to another.

The cast and producers were mum about what's coming for Whittaker's Doctor. Gill said Yas is a 19-year-old from Sheffield who "gets whisked away on this adventure" through space and time. "She loves the Doctor. She always questions what she's doing, but she always goes along with it."

Whittaker was coy about what her new Doctor is like. She "requires a lot of energy, a lot of childish wonder: the actress said. "I'm quite fidgety. There's not a lot of stillness, I'm afraid."

Added Strevens: "This Doctor loves life, and treats everything with awe and wonder. It's a joyous performance."

During the fan question-and-answer portion, a little girl told Whittaker that she has been waiting a long time for a female Doctor, one of the presentation's more emotional moments.

"The thing about this role, and why it's so amazing for any actor, is that essentially gender is irrelevant, and it's completely liberating: she said. "I'm playing an alien, so all those rules are kind of irrelevant to the approach. Sometimes within episodes, other people's response is different because they're different to a woman, and that's interesting. That's why this role will continue to be layered and fascinating to play."

Whittaker knows "Doctor Who" means a lot to many people, and sometimes that legacy "can be overwhelming: she said. "Being British, it's kind of a fabric of our childhoods. TARDIS is used in everybody's vocabulary. Being the first female, it's incredibly inclusive, and knowing there are fans all over the world, it's a Whovian family you want to be a part of.

"The madness will be a part of this, and it's shared with 12 other Doctors I'm lucky to be a part of. We're standing on their shoulders, and hopefully we do them all proud."

Caption: Jodie Whittaker will be the 13th Doctor - and the first woman to play the storied time-traveler - when "Doctor Who" returns this fall.

Caption: Details about the new Doctor are being kept under wraps.