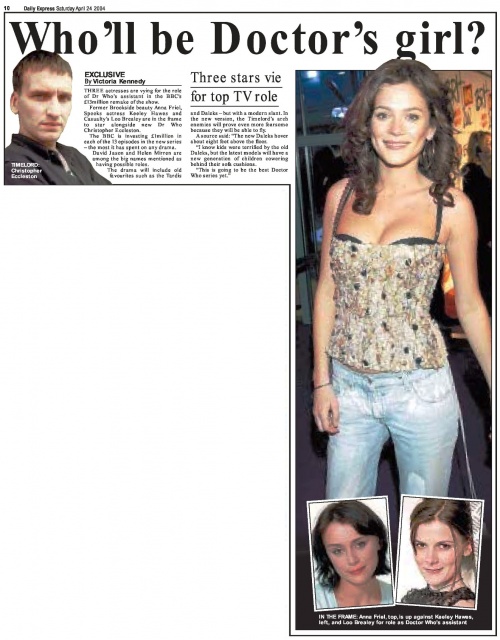 THREE actresses are vying for the role of Dr Who's assistant in the BBC's £13million remake of the show.

The BBC is investing £1million in each of the 13 episodes in the new series — the most it has spent on any drama. David Jason and Helen Mirren are among the big names mentioned as having possible roles.

The drama will include old favourites such as the Tardis and Daleks —but with a modern slant. In the new version, the Timelord's arch enemies will prove even more fearsome because they will be able to fly.

A source said: "The new Daleks hover about eight feet above the floor.

"I know kids were terrified by the old Daleks, but the latest models will have a new generation of children cowering behind their sofa cushions.

"This is going to be the best Doctor Who series yet."

Caption: IN THE FRAME: Anna Friel, top, is up against Keeley Hawes, left, and Loo Brealey for role as Doctor Who's assistant