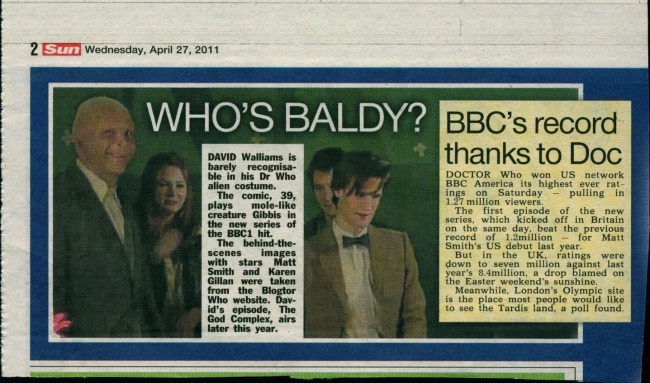 DAVID Walliams is barely recognisable in his Dr Who alien costume.

The comic, 39, plays mole-like creature Gibbis in the new series of the BBC1 hit.

The behind-the-scenes images with stars Matt Smith and Karen Gillan were taken from the Blogtor Who website. David's episode, The God Complex, airs later this year.

BBC's record thanks to Doc

DOCTOR Who won US network BBC America its highest ever ratings on Saturday — pulling in 1.27 million viewers.

The first episode of the new series, which kicked off in Britain on the same day, beat the previous record of 1.2million — for Matt Smith's US debut last year.

But in the UK. ratings were down to seven million against last year's 8.4million, a drop blamed on the Easter weekend's sunshine.

Meanwhile, London's Olympic site is the place most people would like to see the Tardis land, a poll found.