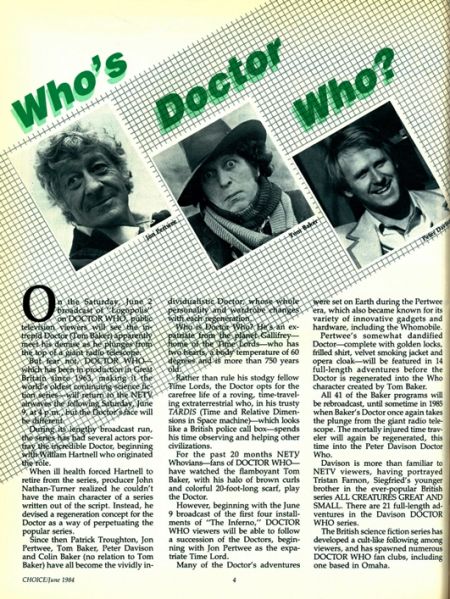 On the Saturday, June 2 broadcast of "Logopolis" on DOCTOR WHO, public television viewers will see the intrepid Doctor (Tom Baker) apparently meet his demise as he plunges from the top of a giant radio telescope.

But fear not, DOCTOR WHO - which has been in production in Great Britain since 1963, making it the oldest continuing science fiction series - will return to the NETV airwaves the following Saturday, June 9, at 4 p.m., but the Doctor's face will be different.

During its lengthy broadcast run, the series has had several actors portray the incredible Doctor, beginning with William Hartnell who originated the role.

When ill health forced Hartnell to retire from the series, producer John Nathan-Turner realized he couldn't have the main character of a series written out of the script. Instead, he devised a regeneration concept for the Doctor as a way of perpetuating the popular series.

Since then Patrick Troughton, Jon Pertwee, Tom Baker, Peter Davison and Colin Baker (no relation to Tom Baker) have all become the vividly individualistic Doctor, whose whole personality and wardrobe changes with each regeneration.

Who is DOCTOR WHO? He's an expatriate from the planet Gallifrey - home of the Time Lords - who has two hearts, a body temperature of 60 degrees and is more than 750 years old.

Rather than rule his stodgy fellow Time Lords, the Doctor opts for the carefree life of a roving, time-traveling extraterrestrial who, in his trusty TARDIS (Time and Relative Dimensions in Space machine) — which looks like a British police call box—spends his time observing and helping other civilizations.

For the past 20 months NETV Whovians — fans of DOCTOR WHO — have watched the flamboyant Tom Baker, with his halo of brown curls and colorful 20-foot-long scarf, play the Doctor.

However, beginning with the June 9 broadcast of the first four installments of "The Inferno," DOCTOR WHO viewers will be able to follow a succession of the Doctors, beginning with Jon Pertwee as the expatriate Time Lord.

Many of the Doctor's adventures were set on Earth during the Pertwee era, which also became known for its variety of innovative gadgets and hardware, including the Whomobile.

Pertwee's somewhat dandified Doctor—complete with golden locks, frilled shirt, velvet smoking jacket and opera cloak—will be featured in 14 full-length adventures before the Doctor is regenerated into the Who character created by Tom Baker.

All 41 of the Baker programs will be rebroadcast, until sometime in 1985 when Baker's Doctor once again takes the plunge from the giant radio telescope. The mortally injured time traveler will again be regenerated, this time into the Peter Davison DOCTOR WHO.

Davison is more than familiar to NETV viewers, having portrayed Tristan Farnon, Siegfried's younger brother in the ever-popular British series ALL CREATURES GREAT AND SMALL. There are 21 full-length adventures in the Davison DOCTOR WHO series.

The British science fiction series has developed a cult-like following among viewers, and has spawned numerous DOCTOR WHO fan clubs, including one based in Omaha.