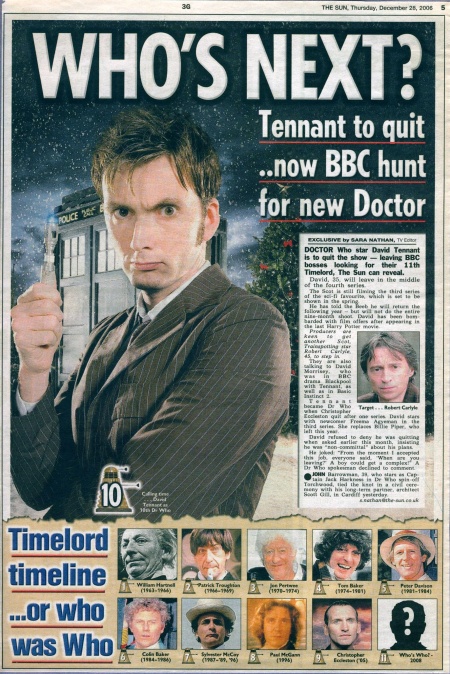 DOCTOR Who star David Tennant is to quit the show — leaving BBC bosses looking for their 11th Timelord, The Sun can reveal. David, 35, will leave in the middle of the fourth series.

The Scot is still filming the third series of the sci-fi favourite, which is set to be shown in the spring.

He has told the Beeb he will return the following year - but will not do the entire nine-month shoot. David has been bombarded with film offers after appearing in the last Harry Potter movie.

Producers are keen to get another Scot, Trainspotting star Robert Carlyle, 45, to step in.

They are also talking to David Morrisey, who was in BBC drama Blackpool with Tennant, as well as in Basic Instinct 2.

Tennant became Dr Who when Christopher Eccleston quit after one series. David stars with newcomer Freema Agyeman in the third series. She replaces Billie Piper, who left this year.

David refused to deny he was quitting when asked earlier this month, insisting he was "non-committal" about his plans.

He joked: "From the moment I accepted this job, everyone said, 'When are you leaving?' A boy could get a complex!" A Dr Who spokesman declined to comment.

JOHN Barrowman, 39, who stars as Captain Jack Harkness in Dr Who spin-off Torchwood, tied the knot in a civil ceremony with his long-term partner, architect Scott Gill, in Cardiff yesterday.

Timelord timeline ...or who was