Who's Next (TV Guide) 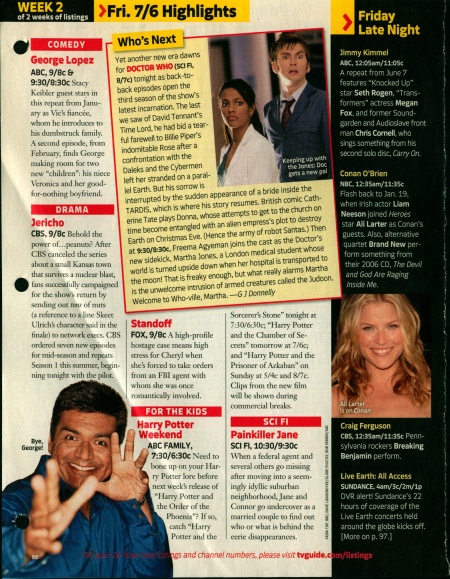 Yet another new era dawns for DOCTOR WHO (SCI FI, 8/7c) tonight as back-to-back episodes open the third season of the show's latest incarnation. The last we saw of David Tennant's Time Lord, he had bid a tearful farewell to Billie Piper's indomitable Rose after a confrontation with the Daleks and the Cybermen left her stranded on a parallel Earth. But his sorrow is interrupted by the sudden appearance of a bride inside the TARDIS, which is where his story resumes. British comic Catherine Tate plays Donna, whose attempts to get to the church on time become entangled with an alien empress's plot to destroy Earth on Christmas Eve. (Hence the army of robot Santas.) Then at 9:30/8:30c, Freema Agyman joins the cast as the Doctor's new sidekick, Martha Jones, a London medical student whose world is turned upside down when her hospital is transported to the moon! That is freaky enough, but what really alarms Martha is the unwelcome intrusion of armed creatures called the Judoon. Welcome to Who-ville, Martha.

Caption: Keeping up with the Jones: Doc gets a new pal