Who's On: First A Telepic, Maybe A Series 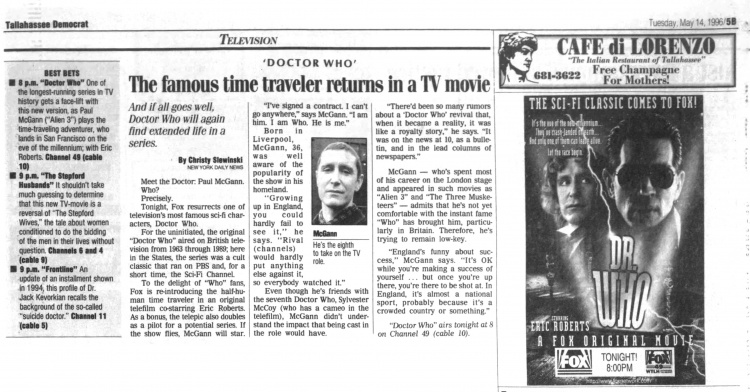 Tomorrow night at 8, Fox resurrects one of television's most famous sci-fi characters, Doctor Who.

For the uninitiated, the original "Doctor Who" aired on British television from 1963 through 1989; here in the States, the series was a cult classic that ran on PBS and, for a short time, the Sci-Fi Channel.

To the delight of "Who" fans, Fox is re-introducing the half-human time traveler in an original telefilm co-starring Eric Roberts. As a bonus, the telepic also doubles as a pilot for a potential series. If the show flies, McGann will star.

Born in Liverpool, McGann, 36, was well aware of the popularity of the show in his homeland, where the telefilm will air in a few weeks.

"Growing up in England, you could hardly fail to see it," he says. "Rival [channels] would hardly put anything else against it, so everybody watched it."

Even though he's friends with the seventh Doctor Who, Sylvester McCoy (who has a cameo in the telefilm), McGann didn't understand the impact that being cast in the role would have.

"There'd been so many rumors about a 'Doctor Who' revival that, when it became a reality, it was like a royalty story," he says. "It was on the news at 10, as a bulletin, and in the lead columns of newspapers."

McGann who's spent most of his career on the London stage and appeared insuch movies as "Alien 3" and "The Three Musketeers" admits that he's not yet comfortable with the instant fame "Who" has brought him, particularly in Britain. Therefore, he's trying to remain low-key.

"England's funny about success," McGann says. "It's okay while you're making a success of yourself ... but once you're up there, you're there to be shot at. In England, it's almost a national sport, probably because it's a crowded country or something."