Who's On First With Fans 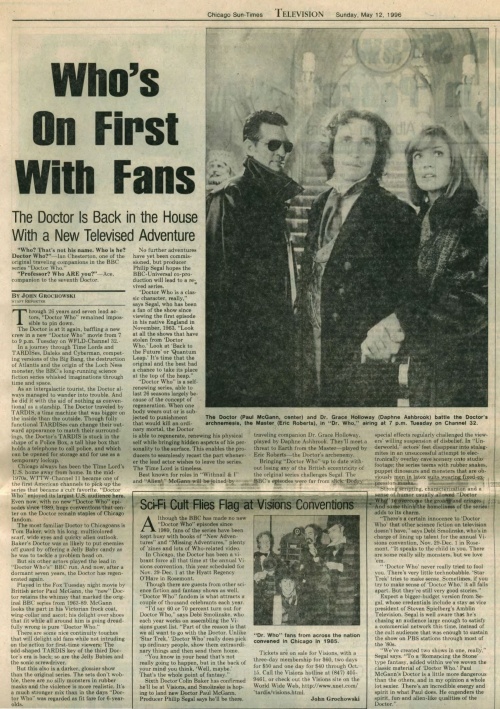 "Who? That's not his name. Who is he? Doctor Who?"—Ian Chesterton, one of the original traveling companions in the BBC series "Doctor Who."

"Professor? Who ARE you?"—Ace, companion to the seventh Doctor.

Through 26 years and seven lead actors, "Doctor Who" remained impossible to pin down.

The Doctor is at it again, baffling a new crew in a new "Doctor Who" movie from 7 to 9 p.m. Tuesday on WFLD-Channel 32.•

In a journey through Time Lords and TARDISes, Daleks and Cyberman, competing versions of the Big Bang, the destruction of Atlantis and the origin of the Loch Ness monster, the BBC's long-running science fiction series whisked imaginations through time and space.

As an intergalactic tourist, the Doctor always managed to wander into trouble. And he did it with the aid of nothing as conventional as a starship. The Doctor traveled by TARDIS, a time machine that was bigger on the inside than the outside. Though fully functional TARDISes can change their outward appearance to match their surroundings, the Doctor's TARDIS is stuck in the shape of a Police Box, a tall blue box that holds a telephone to call police, and which can be opened for storage and for use as a temporary lockup.

Chicago always has been the Time Lord's U.S. home away from home. In the mid-1970s, WTTW-Channel 11 became one of the first American channels to pick up the series that became a cult favorite. "Doctor Who" enjoyed its largest U.S. audience here. Even now, with no new "Doctor Who" episodes since 1989, huge conventions that center on the Doctor remain staples of Chicago fandom.

The most familiar Doctor to Chicagoans is Tom Baker, with his long, multicolored scarf, wide eyes and quirky alien outlook. Baker's Doctor was as likely to put enemies off guard by offering a Jelly Baby candy as he was to tackle a problem head on.

But six other actors played the lead in "Doctor Who's" BBC run. And now, after a dormant seven years, the Doctor has regenerated again.

Played in the Fox Tuesday night movie by British actor Paul McGann, the "new" Doctor retains the whimsy that marked the original BBC series from 1963-89. McGann looks the part in his Victorian frock coat, wing-collar and ascot; his delight over shoes that fit while all around him is going dreadfully wrong is pure "Doctor Who."

There are some nice continuity touches that will delight old fans while not intruding on the action for first-time viewers: The odd-shaped TARDIS key of the third Doctor's era is back; so are the Jelly Babies and the sonic screwdriver.

But this also is a darker, glossier show than the original series. The sets don't wobble, there are no silly monsters in rubber masks and the violence is more realistic. It's a much stronger mix than in the days "Doctor Who" was regarded as fit fare for 6-year olds.

No further adventures have yet been commissioned, but producer Philip Segal hopes the BBC-Universal co-production will lead to a revived series.

"Doctor Who is a classic character, really," says Segal, who has been a fan of the show since viewing the first episode in his native England in November, 1963. "Look at all the shows that have stolen from 'Doctor Who.' Look at 'Back to the Future' or 'Quantum Leap.' It's time that the original and the best had a chance to take its place at the top of the heap."

"Doctor Who" is a self-renewing series, able to last 26 seasons largely because of the concept of regeneration. When one body wears out or is subjected to punishment that would kill an ordinary mortal, the Doctor is able to regenerate, renewing his physical self while bringing hidden aspects of his personality to the surface. This enables the producers to seamlessly recast the part whenever the lead actor wishes to leave the series. The Time Lord is timeless.

Best known for roles in "Withnail & I" and "Alien3," McGann will be joined by special effects regularly challenged the viewers' willing suspension of traveling companion Dr. Grace Holloway, played by Daphne Ashbrook. They'll meet a threat to Earth from the Master—played by Eric Roberts-the Doctor's archenemy.

Bringing "Doctor Who" up to date without losing any of the British eccentricity of the original series challenges Segal. The BBC's episodes were far from slick: Dodgy special effects challenged the viewers' willing suspension of disbelief. In "Underworld," actors' feet disappear into stalagmites in an unsuccessful attempt to electronically overlay cave scenery onto studio footage; the series teems with rubber snakes, puppet dinosaurs and monsters that are obviously men in latex suits wearing fixed-expression masks.

Strong scripting. characterization and a sense of humor usually allowed "Doctor Who" overcome the groan and cringes. And some think the homeliness of the series - adds to its charm.

"There's a certain innocence to 'Doctor Who' that other science fiction on television doesn't have," says Debi Smolinske, who's in charge of lining up talent for the annual Visions convention, Nov. 29-Dec. 1 in Rosemont. "It speaks to the child in you. There are some really silly monsters, but we love 'em.

"'Doctor Who' never really tried to fool you. There's very little technobabble. 'Star Trek' tries to make sense. Sometimes, if you try to make sense of 'Doctor Who,' it all falls apart. But they're still very good stories."

Expect a bigger-budget version from Segal, whose credentials include a stay as vice president of Steven Spielberg's Amblin Television. Segal is well aware that he's chasing an audience large enough to satisfy a commercial network this time, instead of the cult audience that was enough to sustain the show on PBS stations through most of the '80s.

"We've created two shows in one, really," Segal says. "To a 'Romancing the Stone' type fantasy, added within we've woven the classic material of 'Doctor Who.' Paul McGann's Doctor is a little more dangerous than the others, and in my opinion a whole lot sexier. There's an incredible energy and spirit in what Paul does. He engenders the spirit, fun and alien-like qualities of the Doctor."

Although the BBC has made no new "Doctor Who" episodes since 1989, fans of the series have been kept busy with books of "New Adventures" and "Missing Adventures," plenty of 'zines and lots of Who-related video.

In Chicago, the Doctor has been a vibrant force all that time at the annual Visions convention, this year scheduled for Nov. 29-Dec. 1 at the Hyatt Regency O'Hare in Rosemont.

Though there are guests from other science fiction and fantasy shows as well, "Doctor Who" fandom is what attracts a couple of thousand celebrants each year.

"I'd say 60 or 70 percent turn out for Doctor Who," says Debi Smolinske, who each year works on assembling the Visions guest list. "Part of the reason is that we all want to go with the Doctor. Unlike 'Star Trek,' 'Doctor Who' really does pick up ordinary people, show them extraordinary things and then send them home.

"You know in your head that's not really going to happen, but in the back of your mind you think, 'Well, maybe.' That's the whole point of fantasy." Sixth Doctor Colin Baker has confirmed he'll be at Visions, and Smolinske is hoping to land new Doctor Paul McGann. Producer Philip Segal says he'll be there.

Tickets are on sale for Visions, with a three-day membership for $60, two days for $50 and one day for $40 through Oct. 15. Call the Visions hotline or check out the Visions site on the World Wide Web, http://www.xnet.com/~tardis/visions.html.

Caption: "Dr. Who" fans from across the nation convened in Chicago in 1985.