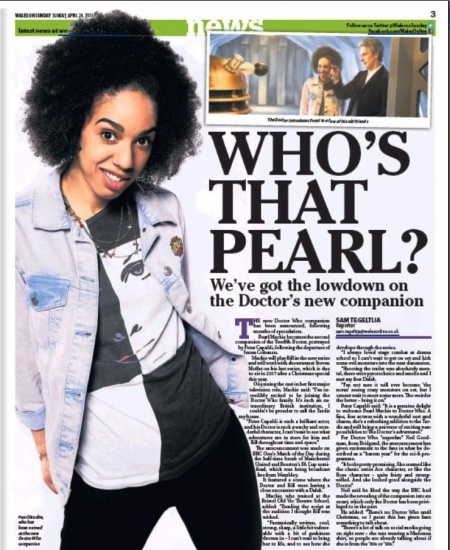 We've got the lowdown on the Doctor's new companion

THE new Doctor Who companion has been announced, following months of speculation. Pearl Mackie becomes the second companion of the Twelfth Doctor, portrayed by Peter Capaldi, following the departure of Jenna Coleman. Mackie will play Bill in the new series and will work with showrunner Steven Moffat on his last series, which is due to air in 2017 after a Christmas special this year. On joining the cast in her first major television role, Mackie said: "I'm incredibly excited to be joining the Doctor Who family. It's such an extraordinary British institution, I couldn't be prouder to call the Tardis my home. "Peter Capaldi is such a brilliant actor, and his Doctor is such a wacky and wonderful character, I can't wait to see what adventures are in store for him and Bill throughout time and space." The announcement was made on BBC One's Match of the Day during the half-time break of Manchester United and Everton's FA Cup semifinal, which was being broadcast live from Wembley. It featured a scene where the Doctor and Bill were having a close encounter with a Dalek. Mackie, who trained at the Bristol Old Vic Theatre School, added: "Reading the script at the audition I thought Bill was wicked. "Fantastically written, cool, strong, sharp, a little bit vulnerable with a bit of geekiness thrown in – I can't wait to bring her to life, and to see how she develops through the series.

"I always loved stage combat at drama school so I can't wait to get on set and kick some evil monsters into the next dimension.

"Shooting the trailer was absolutely mental, there were pyrotechnics and smoke and I met my first Dalek.

"I'm not sure it will ever become 'the norm' seeing crazy monsters on set, but I cannot wait to meet some more. The weirder the better – bring it on."

Peter Capaldi said: "It is a genuine delight to welcome Pearl Mackie to Doctor Who. A fine, fine actress with a wonderful zest and charm, she's a refreshing addition to the Tardis and will bring a universe of exciting new possibilities to The Doctor's adventures."

For Doctor Who "superfan" Neil Goodman, from Bridgend, the announcement has given excitement to the fans in what he described as a "barren year" for the sci-fi programme.

"It looks pretty promising. She seemed like the classic series Ace character, or like the Rose character – quite feisty and strongwilled. And she looked good alongside the Doctor."

Neil said he liked the way the BBC had made the revealing of the companion into an event, which only the Doctor has been privileged to in the past.

He added: "There's no Doctor Who until Christmas, so I guess this has given fans something to talk about.

"There's a lot of talk on social media going on right now – she was wearing a Madonna shirt, so people are already talking about if she is from the '80s or '90s."