Who's Who? (The Spectator) 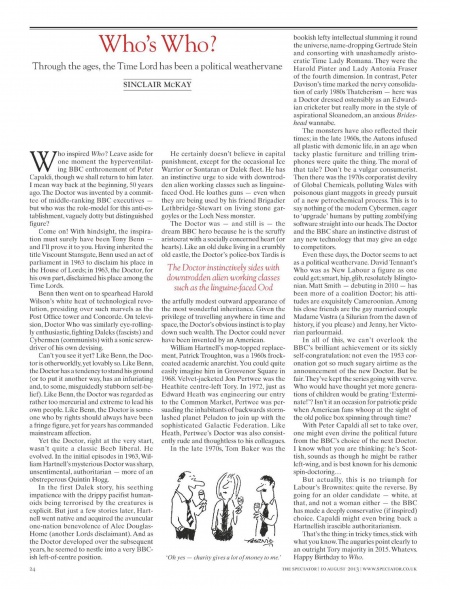 Through the ages, The Time Lord has been a political weathervane

Who inspired Who ? Leave aside for one moment the hyperventilating BBC enthronement of Peter Capaldi, though we shall return to him later. I mean way back at the beginning, 50 years ago. The Doctor was invented by a committee of middle-ranking BBC executives - but who was the role-model for this anti-establishment, vaguely dotty but distinguished figure?

Come on! With hindsight, the inspiration must surely have been Tony Benn - and I'll prove it to you. Having inherited the title Viscount Stansgate, Benn used an act of parliament in 1963 to disclaim his place in the House of Lords; in 1963, the Doctor, for his own part, disclaimed his place among the Time Lords.

Benn then went on to spearhead Harold Wilson's white heat of technological revolution, presiding over such marvels as the Post Office tower and Concorde. On television, Doctor Who was similarly eye-rollingly enthusiastic, fighting Daleks (fascists) and Cybermen (communists) with a sonic screwdriver of his own devising.

Yet the Doctor, right at the very start, wasn't quite a classic Beeb liberal. He evolved. In the initial episodes in 1963, William Hartnell's mysterious Doctor was sharp, unsentimental, authoritarian - more of an obstreperous Quintin Hogg.

In the first Dalek story, his seething impatience with the drippy pacifist humanoids being terrorised by the creatures is explicit. But just a few stories later, Hartnell went native and acquired the avuncular one-nation benevolence of Alec Douglas Home (another Lords disclaimant). And as the Doctor developed over the subsequent years, he seemed to nestle into a very BBCish left-of-centre position.

He certainly doesn't believe in capital punishment, except for the occasional Ice Warrior or Sontaran or Dalek fleet. He has an instinctive urge to side with downtrodden alien working classes such as linguine faced Ood. He loathes guns - even when they are being used by his friend Brigadier Lethbridge-Stewart on living stone gargoyles or the Loch Ness monster.

The Doctor was - and still is - the dream BBC hero because he is the scruffy aristocrat with a socially concerned heart (or hearts). Like an old duke living in a crumbly old castle, the Doctor's police-box Tardis is the artfully modest outward appearance of the most wonderful inheritance. Given the privilege of travelling anywhere in time and space, the Doctor's obvious instinct is to play down such wealth. The Doctor could never have been invented by an American.

William Hartnell's mop-topped replacement, Patrick Troughton, was a 1960s frock-coated academic anarchist. You could quite easily imagine him in Grosvenor Square in 1968. Velvet-jacketed Jon Pertwee was the Heathite centre-left Tory. In 1972, just as Edward Heath was engineering our entry to the Common Market, Pertwee was persuading the inhabitants of backwards storm-lashed planet Peladon to join up with the sophisticated Galactic Federation. Like Heath, Pertwee's Doctor was also consistently rude and thoughtless to his colleagues.

In the late 1970s, Tom Baker was the bookish lefty intellectual slumming it round the universe, name-dropping Gertrude Stein and consorting with unashamedly aristocratic Time Lady Romana. They were the Harold Pinter and Lady Antonia Fraser of the fourth dimension. In contrast, Peter Davison's time marked the nervy consolidation of early 1980s Thatcherism - here was a Doctor dressed ostensibly as an Edwardian cricketer but really more in the style of aspirational Sloanedom, an anxious Brideshead wannabe.

The monsters have also reflected their times; in the late 1960s, the Autons infused all plastic with demonic life, in an age when tacky plastic furniture and trilling trimphones were quite the thing. The moral of that tale? Don't be a vulgar consumerist.

Then there was the 1970s corporatist devilry of Global Chemicals, polluting Wales with poisonous giant maggots in greedy pursuit of a new petrochemical process. This is to say nothing of the modern Cybermen, eager to 'upgrade' humans by putting zombifying software straight into our heads. The Doctor and the BBC share an instinctive distrust of any new technology that may give an edge to competitors.

Even these days, the Doctor seems to act as a political weathervane. David Tennant's Who was as New Labour a figure as one could get; smart, hip, glib, resolutely Islingtonian. Matt Smith - debuting in 2010 - has been more of a coalition Doctor; his attitudes are exquisitely Cameroonian. Among his close friends are the gay married couple Madame Vastra (a Silurian from the dawn of history, if you please) and Jenny, her Victorian parlourmaid.

In all of this, we can't overlook the BBC's brilliant achievement or its sickly self- congratulation: not even the 1953 coronation got so much sugary airtime as the announcement of the new Doctor. But be fair. They've kept the series going with verve. Who would have thought yet more generations of children would be grating 'Exterminate!'? Isn't it an occasion for patriotic pride when American fans whoop at the sight of the old police box spinning through time?

With Peter Capaldi all set to take over, one might even divine the political future from the BBC's choice of the next Doctor. I know what you are thinking: he's Scottish, sounds as though he might be rather left-wing, and is best known for his demonic spin-doctoring. . .

But actually, this is no triumph for Labour's Brownites: quite the reverse. By going for an older candidate - white, at that, and not a woman either - the BBC has made a deeply conservative (if inspired) choice. Capaldi might even bring back a Hartnellish irascible authoritarianism.

That's the thing: in tricky times, stick with what you know. The auguries point clearly to an outright Tory majority in 2015. Whatevs. Happy Birthday to Who.