Who's a lucky devil 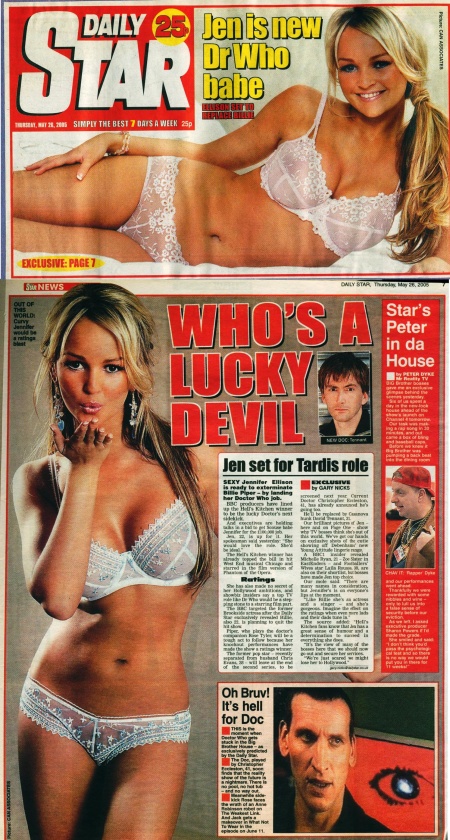 SEXY Jennifer Ellison is ready to exterminate Billie Piper - by landing her Doctor Who job.

BBC producers have lined up the Hell's Kitchen winner to be the lucky Doctor's next sidekick.

And executives are holding talks in a bid to get Scouse babe Jennifer for the £100,000 job.

Jen, 22, is up for it. Her spokesman said yesterday: "She would love the role. She'd be ideal."

The Hell's Kitchen winner has already topped the bill in hit West End musical Chicago and starred in the film version of Phantom of the Opera.

She has also made no secret of her Hollywood ambitions, and showbiz insiders say a top TV role like Dr Who would be a stepping stone to a starring film part.

The BBC targeted the former Brookside actress after the Daily Star exclusively revealed Billie, also 22, is planning to quit the hit show.

Piper, who plays the doctor's companion Rose Tyler, will be a tough act to follow because her knockout performances have made the show a ratings winner.

The former pop star - recently separated from husband Chris Evans, 38 - will leave at the end of the second series, to be screened next year. Current Doctor Christopher Eccleston, 41, has already announced he's going too.

Our brilliant pictures of Jen - here and on Page One - show why TV bosses think she's out of this world. We've got our hands on exclusive shots of the cutie showing off Debenhams' new Young Attitude lingerie range.

A BBC1 insider revealed Michelle Ryan, 21 - Zoe Slater in EastEnders - and Footballers' Wives star Laila Rouass, 30, are also on their shortlist, but bosses have made Jen top choice.

Our mole said: "There are many names in consideration, but Jennifer's is on everyone's lips at the moment.

"Like Billie she's an actress and a singer - and she's gorgeous. Imagine the effect on the ratings when even more lads and their dads tune in."

The source added: "Hell's Kitchen fans know that Jen has a great sense of humour and a determination to succeed in everything she does.

"It's the view of many of the bosses here that we should now go out and secure her services.

"We're just scared we might lose her to Hollywood."

Caption: OUT OF THIS WORLD: Curvy Jennifer would be a ratings blast

Oh Bruv! It's hell for Doc

THIS is the moment when Doctor Who gets stuck in the Big Brother House - as exclusively predicted by the Daily Star.

The Doc, played by Christopher Eccleston, 41, soon finds that the reality show of the future is a nightmare. There is no pool, no hot tub - and no way out.

Meanwhile sidekick Rose faces the wrath of an Anne Robinson robot on The Weakest Link. And Jack gets a makeover in What Not To Wear in the episode on June 11.