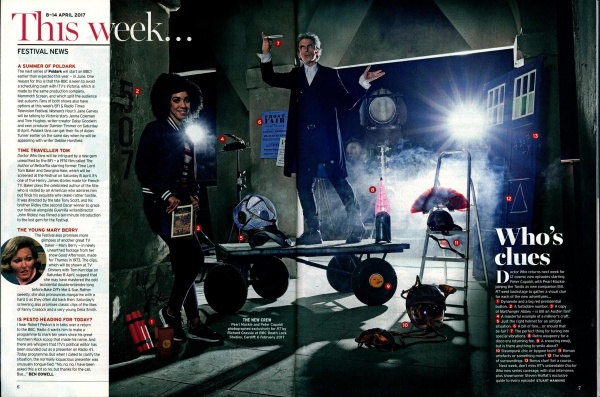 Doctor Who returns next week for 12 cosmic new episodes starring Peter Capaldi, with Pearl Mackie joining the Tardis as new companion Bill. RT went backstage to gather a visual clue for each of the new adventures...

1 Dynamite and a big red presidential button. 2 A forbidden number. 3 A copy of Northanger Abbey — is Bill an Austen fan? 4 A masterful example of a milliner's craft. 5 Just the right helmet for an airtight situation. 6 A bill of fare... or should that be fair? 7 The perfect thing for tuning into special vibrations. 8 Retro weaponry for a disco era returning foe. 9 A snoozing emoji, but is there anything to smile about? 10 Steampunk chic or bygone tech? 11 Roman artefacts or something more? 12 The shape of surroundings. 13 Bonus clue! Set a course...

Doctor Who fans will be intrigued by a new gem unearthed by the BFI - a 1974 film called The Author of Beltraffio starring former Time Lord Tom Baker and Georgina Hale, which will be screened at the Festival on Saturday 8 April. It's one of five Henry James stories made for French TV. Baker plays the celebrated author of the title who is visited by an American who admires him but finds his exquisite wife (Hale) rather hostile. It was directed by the late Tony Scott, and his brother Ridley (the second Oscar winner to grace our festival alongside Guerrilla writer/director John Ridley) has filmed a ten-minute introduction to the lost gem for the Festival.