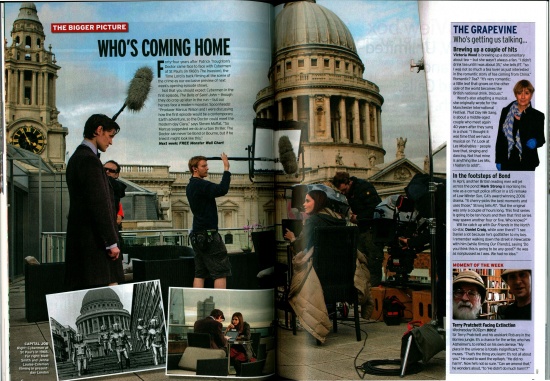 Forty-four years after Patrick Troughton's Doctor came face to face with Cybermen at St Paul's (in 1968's The Invasion), the Time Lord is back filming at the scene of the crime as our exclusive preview of next week's opening episode shows.

Not that you should expect Cybermen in the first episode, The Bells of Saint John — though they do crop up later in the run — but our heroes face a modern monster, Spoonheads! "Producer Marcus Wilson and I were discussing how the first episode would be a contemporary Earth adventure, so the Doctor could meet the modern-day Clara," says Steven Moffat. "So Marcus suggested we do an urban thriller. The Doctor can never be Bond or Bourne, but if he tried it might look like this."

MOMENT OF THE WEEK