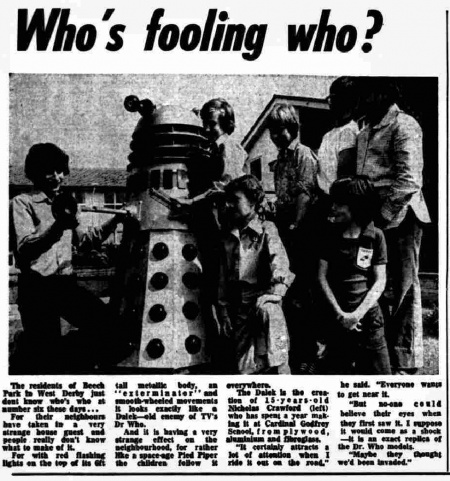 The residents of Beach Park in West Derby just don't know who's who at number six these days...

For their neighbours have taken in a very strange house guest and people really don't know what to make of it.

For with red flashing lights on the top of its 6ft tall metallic body, an "exterminator" and smooth-wheeled movements it looks exactly like the Dalek old enemy of TV's Dr. Who.

And it is having a very strange effect on the neighbourhood, for rather like a space-age Pied Piper the children follow it everywhere.

The Dalek is the creation of 15-years-old Nicholas Crawford (left) who has spent a year making it at Cardinal Godfrey School, from plywood, aluminium and fibreglass.

"It's certainly attracts a lot of attention when I ride it out on the road," he said. "Everyone wants to get near it.

"But no-one could believe their eyes when they first saw it. I suppose it would come as a shock it is an exact replica of Dr. Who models.

Maybe they thought we'd been invaded.