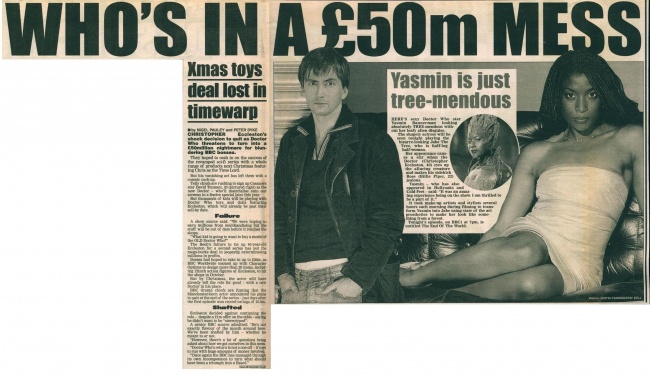 CHRISTOPHER Eccleston's shock decision to quit as Doctor Who threatens to turn into a £50million nightmare for blundering BBC bosses.

They hoped to cash in on the success of the revamped sci-fi series with a whole range of products next Christmas featuring Chris as the Time Lord.

But his vanishing act has left them with a cosmic cock-up.

Telly chiefs are rushing to sign up Casanova star David Tennant, 33 (pictured right) as the new Doctor - who'll materialise onto our screens in a festive special later this year.

But thousands of kids will be playing with Doctor Who toys and dolls featuring Eccleston. which will already be past their sell-by date.

A show source said: "We were hoping to earn millions from merchandising but the stuff will be out of date before it reaches the shops.

"What kid is going to want to buy a model of the OLD Doctor Who?"

The Beeb's failure to tie up 40-year-old Eccleston for a second series has put the mega-bucks deal in jeopardy, exterminating millions in profits.

Bosses had hoped to rake in up to E.50m, as BBC Worldwide teamed up with Character Options to design more than 20 items, including 12inch action figures of Eccleston, to hit the shops in October.

But by Christmas. the actor will have already left the role for good - with a new Doctor in his place.

BBC drama chiefs are fuming that the Manchester-born actor announced his plans to quit at the end of the series - just days after the first episode won record ratings of 10.5m.

Eccleston decided against continuing the role - despite a Elm offer on the table - saying he didn't want to be "stereotyped".

A senior BBC source admitted: "He's not exactly flavour of the month around here. We've been shafted by him - whether he meant to or not.

"However, there's a lot of questions being asked about how we got ourselves in this mess. "Doctor Who's return is not a one-off - it's set to run with huge amounts of money involved. "Once again the BBC has managed through its own incompetence to turn what should have been a triumph into a fiasco."

HERE'S sexy Doctor Who star Yasmin Bannerman looking absolutely TREE-mendous without her leafy alien disguise. The shapely actress will be seen tonight playing the bizarre-looking Jabe The Tree, who is half-log half-woman.

Her appearance causes a stir when the Doctor (Christopher Eccleston, 40) eyes up the alluring creature and makes his sidekick Rose (Billie Piper, 22) jealous.

Yasmin - who has also appeared in Hollyoaks and Cold Feet - said: "It was an amazing experience being on the show. I am thrilled to be a part of it."

It took make-up artists and stylists several hours each morning during filming to transform Yasmin into Jabe using state of the art prosthetics to make her look like something from a forest.

Tonight's episode, on BBC1 at 7pm, is entitled The End Of The World.