Who's on first English cult hero has following here 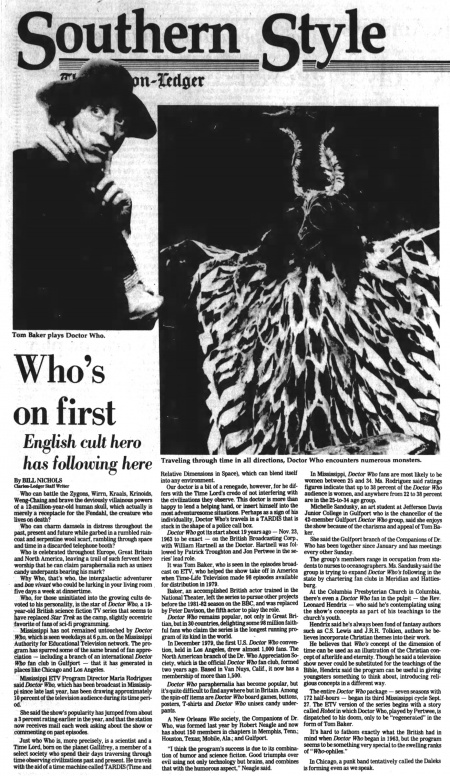 Who can battle the Zygons, Wirrn, Kraals, Krinoids, Weng-Chaing and brave the deviously villainous powers of a 12-million-year-old human skull, which actually is merely a receptacle for the Fendahl, the creature who lives on death?

Who can charm damsels in distress throughout the past, present and future while garbed in a rumbled raincoat and serpentine wool scarf, rambling through space and time in a discarded telephone booth?

Who is celebrated throughout Europe, Great Britain and North America, leaving a trail of such fervent hero worship that he can claim paraphernalia such as unisex candy underpants bearing his mark?

Why Who, that's who, the intergalactic adventurer and bon vivant who could be lurking in your living room five days a week at dinnertime.

Who, for those uninitiated into the growing cults devoted to his personality, is the star of Doctor Who, a 19-year-old British science fiction TV series that seems to have replaced Star Trek as the camp, slightly eccentric favorite of fans of sci-fi programming.

Mississippi has not remained untouched by Doctor Who, which is seen weekdays at 6 p.m. on the Mississippi Authority for Educational Television network. The program has spurred some of the same brand of fan appreciation — including a branch of an international Doctor Who fan club in Gulfport — that it has generated in places like Chicago and Los Angeles.

Mississippi ETV Program Director Maria Rodriguez said Doctor Who, which has been broadcast in Mississippi since late last year, has been drawing approximately 10 percent of the television audience during its time period.

She said the show's popularity has jumped from about a 3 percent rating earlier in the year, and that the station now receives mail each week asking about the show or commenting on past episodes.

Just who Who is, more precisely, is a scientist and a Time Lord, born on the planet Gallifrey, a member of a select society who spend their days traversing through time observing civilizations past and present. He travels with the aid of a time machine called TARDIS (Time and Relative Dimensions in Space), which can blend itself into any environment.

Our doctor is a bit of a renegade, however, for he differs with the Time Lord's credo of not interfering with the civilizations they observe. This doctor is more than happy to lend a helping hand, or insert himself into the most adventuresome situations. Perhaps as a sign of his individuality, Doctor Who's travels in a TARDIS that is stuck in the shape of a police call box.

Doctor Who got its start about 19 years ago — Nov. 23, 1963 to be exact — on the British Broadcasting Corp., with William Hartnell as the Doctor. Hartnell was followed by Patrick Troughton and Jon Pertwee in the series' lead role.

It was Tom Baker, who is seen in the episodes broadcast on ETV, who helped the show take off in America when Time-Life Television made 98 episodes available for distribution in 1979.

Baker, an accomplished British actor trained in the National Theater, left the series to pursue other projects before the 1981-82 season on the BBC, and was replaced by Peter Davison, the fifth actor to play the role.

Doctor Who remains popular, not only in Great Britian, but in 30 countries, delighting some 98 million faithful fans who claim the series is the longest running program of its kind in the world.

In December 1979, the first U.S. Doctor Who convention, held in Los Angeles, drew almost 1,000 fans. The North American branch of the Dr. Who Appreciation Society, which is the official Doctor Who fan club, formed two years ago. Based in Van Nuys, Calif., it now has a membership of more than 1,500.

Doctor Who paraphernalia has become popular, but it's quite difficult to find anywhere but in Britain. Among the spin-off items are Doctor Who board games, buttons, posters, T-shirts and Doctor Who unisex candy underpants.

A New Orleans Who society, the Companions of Dr. Who, was formed last year by Robert Neagle and now has about 150 members in chapters in Memphis, Tenn.; Houston, Texas; Mobile, Ala.; and Gulfport.

"I think the program's success is due to its combination of humor and science ficiton. Good triumphs over evil using not only technology but brains, and combines that with the humorous aspect.," Neagle said.

In Mississippi, Doctor Who fans are most likely to be women between 25 and 34. Ms. Rodriguez said ratings figures indicate that up to 38 percent of the Doctor Who audience is women, and anywhere from 22 to 38 percent are in the 25-to-34 age group.

Michelle Sandusky, an art student at Jefferson Davis Junior College in Gulfport who is the chancellor of the 42-member Gulfport Doctor Who group, said she enjoys the show because of the charisma and appeal of Tom Baker.

She said the Gulf port branch of the Companions of Dr. Who has been together since January and has meetings every other Sunday.

The group's members range in occupation from students to nurses to oceanographers. Ms. Sandusky said the group is trying to expand Doctor Who's following in the state by chartering fan clubs in Meridian and Hattiesburg.

At the Columbia Presbyterian Church in Columbia, there's even a Doctor Who fan in the pulpit — the Rev. Leonard Hendrix — who said he's contemplating using the show's concepts as part of his teachings to the church's youth.

Hendrix said he's always been fond of fantasy authors such as C.S. Lewis and J.R.R. Tolkien, authors he believes incorporate Christian themes into their work.

He believes that Who's concept of the dimension of time can be used as an illustration of the Christian concept of afterlife and eternity. Though he said a television show never could be substituted for the teachings of the Bible, Hendrix said the program can be useful in giving youngsters something to think about, introducing religious concepts in a different way.

The entire Doctor Who package — seven seasons with 172 half-hours — began its third Mississippi cycle Sept. 27. The ETV version of the series begins with a story called Robot in which Doctor Who, played by Pertwee, is dispatched to his doom, only to be "regenerated" in the form of Tom Baker.

It's hard to fathom exactly what the British had in mind when Doctor Who began in 1963, but the program seems to be something very special to the swelling ranks of " Who-ophiles."

In Chicago, a punk band tentatively called the Daleks is forming even as we speak.

Caption: Traveling through time in all directions, Doctor Who encounters numerous monsters.