Who's on the web 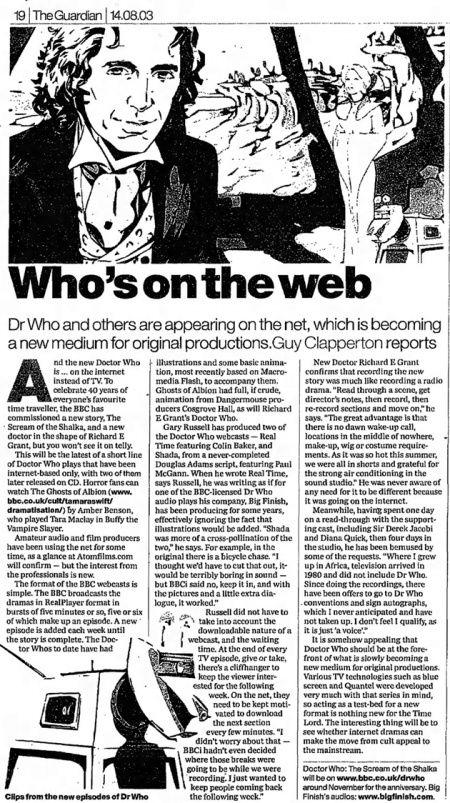 Dr Who and others are appearing on the net, which is becoming a new medium for original productions. Guy Clapperton reports

And the new Doctor Who is ... on the Internet instead of TV. To celebrate 40 years of everyone's favourite time traveller, the BBC has commissioned a new story The

Scream of the Shalka, and a new doctor in the shape of Richard E Grant, but you won't see it on telly.

This will be the latest of a short line of Doctor Who plays that have been internet-based only, with two of them later released on CD. Horror fans can watch The Ghosts of Albion (www.bbc.co.uk/cult/tamaraswitt/dramatisation/) by Amber Benson, who played Tara Maclay in Buffy the Vampire Slayer.

Amateur audio and film producers have been using the net for some time, as a glance at Atomfilms.com will confirm — but the interest from the professionals is new.

The format of the BBC webcasts is simple. The BBC broadcasts the dramas in RealPlayer format in bursts of five minutes or so, five or six of which make up an episode. A new episode is added each week until the story is complete. The Doctor Whos to date have had illustrations and some basic animation, most recently based on Macromedia Flash, to accompany them. Ghosts of Albion had full, if crude, animation from Dangermouse producers Cosgrove Hall, as will Richard E Grant's Doctor Who.

Gary Russell has produced two of the Doctor Who webcasts — Real Time featuring Colin Baker, and Shada, from a never-completed Douglas Adams script, featuring Paul McGann. When he wrote Real Time, says Russell, he was writing as if for one of the BBC-licensed Dr Who audio plays his company, Big Finish, has been producing for some years, effectively ignoring the fact that illustrations would be added. "Shada was more of a cross-pollination of the two; he says. For example, in the original there is a bicycle chase. "I thought. we'd have to cut that out, it-would be terribly boring in sound —but BBCi said no, keep it in, and with the pictures and a little extra dialogue, it worked."

Russell did not have to take into account the downloadable nature of a webcast, and the waiting time. At the end of every TV episode, give or take, there's a cliffhanger to keep the viewer interested for the following week. On the net, they need to be kept motivated to download the next section every few minutes. "I didn't worry about that — BBCi hadn't even decided where those breaks were going to be while we were recording. I just wanted to keep people coming back the following week."

New Doctor Richard E Grant confirrns that recording the new story was much like recording a radio drama. "Read through a scene, get director's notes, then record, then re-record sections and move on: he says. "The great advantage is that there is no dawn wake-up call, locations in the middle of nowhere, make-up, wig or costume requirements. As it was so hot this summer, we were all in shorts and grateful for the strong air conditioning in the sound studio; He was never aware of any need for it to be different because it was going on the Internet.

Meanwhile, having spent one day on a read-through with the supporting cast, including Sir Derek Jacobi and Diana Quick, then four days in the studio, he has been bemused by some of the requests. "Where I grew up in Africa, television arrived in 1980 and did not include Dr Who. Since doing the recordings, there have been offers to go to Dr Who conventions and sign autographs, which I never anticipated and have not taken up. I don't feel I qualify, as it is just 'a voice'."

It is somehow appealing that Doctor Who should be at the forefront of what is slowly becoming a new medium for original productions. Various TV technologies such as blue screen and Quantel were developed very much with that series in mind, so acting as a test-bed for a new format is nothing new for the Time Lord. The interesting thing will be to see whether internet dramas can make the move from cult appeal to the mainstream.

Doctor Who: The Scream of the Shalka will be on www.bbc.co.uk/drwho around November for the anniversary. Big Finish's audios: www.bigfinish.com.

Caption: Clips from the new episodes of Dr Who