Who's that (The Times) 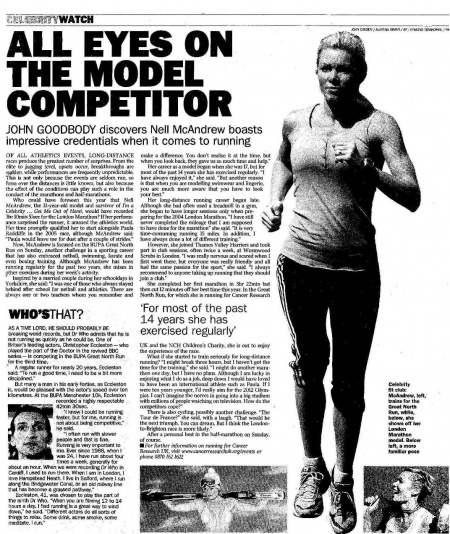 AS A TIME LORD, HE SHOULD PROBABLY BE breaking world records, but Dr Who admits that he is not running as quickly as he could be. One of Britain's leading actors, Christopher Eccleston - who played the part of the Doctor in the revived BBC series - is competing in the BUPA Great North Run for the third time.

A regular runner for nearly 20 years, Eccleston said: "To run a good time, I need to be a bit more disciplined."

But many a man in his early forties, as Eccleston is, would be pleased with the actor's speed over ten kilometres. At the BUPA Manchester 10k, Eccleston recorded a highly respectable 42min 30sec.

"I know I could be running faster, but for me, running is not about being competitive," he said.

"I often run with slower people and that is fine.

Running is very important to me. Ever since 1988, when I was 24, I have run about four times a week, generally for about an hour. When we were recording Dr Who in Cardiff, I used to run there. When I am in London, I love Hamp-stead Heath. I live in Salford, where I run along the Bridgewater Canal, or an old railway line that has become a grassed pathway."

Eccleston, 41, was chosen to play the part of the ninth Dr Who. "When you are filming 12 to 14 hours a day, I find running is a great way to wind down," he said. "Different actors do all sorts of things to relax. Some drink, some smoke, some meditate. I run."