Who's that Doctor? (Red Eye) 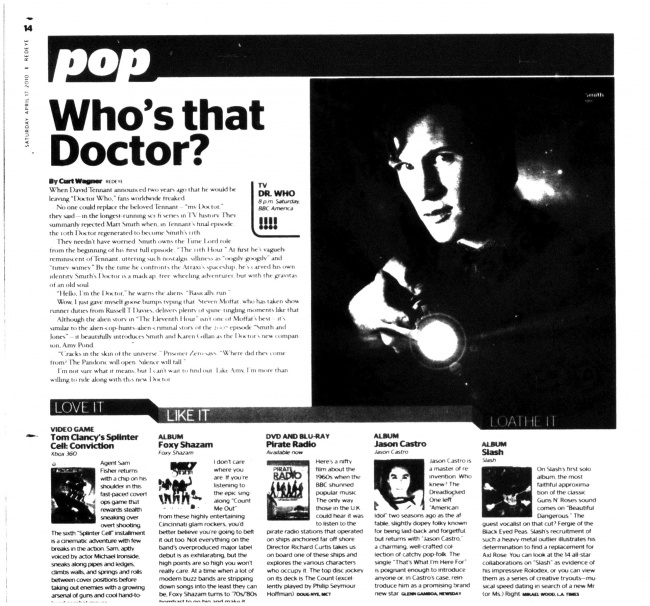 When David Tennant announced two years ago that he would be leaving "Doctor Who," fans worldwide freaked.

No one could replace the beloved Tennant -- "my Doctor," they said -- in the longest-running sci-fi series in TV history. They summarily rejected Matt Smith when, in Tennant's final episode, the 10th Doctor regenerated to become Smith's 11th.

They needn't have worried. Smith owns the Time Lord role from the beginning of his first full episode, "The 11th Hour." At first he's vaguely reminiscent of Tennant, uttering such nostalgic silliness as "oogily-googily" and "timey-wimey." By the time he confronts the Atraxi's spaceship, he's carved his own identity. Smith's Doctor is a madcap, free-wheeling adventurer, but with the gravitas of an old soul.

Wow, I just gave myself goose bumps typing that. Steven Moffat, who has taken show runner duties from Russell T Davies, delivers plenty of spine-tingling moments like that.

Although the alien story in "The Eleventh Hour" isn't one of Moffat's best -- it's similar to the alien-cop-hunts-alien-criminal story of the 2007 episode "Smith and Jones" -- it beautifully introduces Smith and Karen Gillan as the Doctor's new companion, Amy Pond.

"Cracks in the skin of the universe," Prisoner Zero says. "Where did they come from? The Pandorica will open. Silence will fall."

I'm not sure what it means, but I can't wait to find out. Like Amy, I'm more than willing to ride along with this new Doctor.