Who's that girl? (The Sunday Mirror) 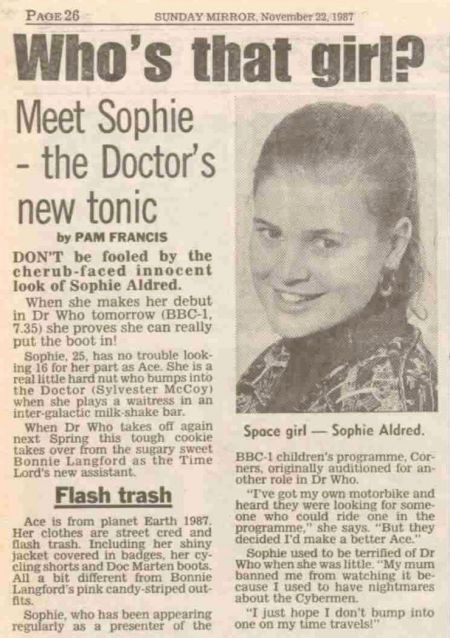 DON'T be fooled by the cherub-faced innocent look of Sophie Aldred.

When she makes her debut in Dr Who tomorrow (BBC-1, 7.35) she proves she can really put the boot in!

Sophie, 25, has no trouble looking 16 for her part as Ace. She is a real little hard nut who bumps into the Doctor (Sylvester McCoy) when she plays a waitress in an inter-galactic milk-shake bar.

When Dr Who takes off again next Spring this tough cookie takes over from the sugary sweet Bonnie Longford as the Time Lord's new assistant.

Ace is from planet Earth 1987. Her clothes are street cred and flash trash. Including her shiny jacket covered in badges, her cycling shorts and Doc Marten boots. All a bit different from Bonnie Langford's pink candy-striped out-fits.

Sophie, who has been appearing regularly as a presenter of the BBC-1 children's programme, Corners, originally auditioned for another role in Dr Who.

'I've got my own motorbike and heard they were looking for someone who could ride one in the programme,' she says. "But they decided I'd make a better Are"

Sophie used to be terrified of Dr Who when she was little. "My mum banned me from watching it because I used to have nightmares about the Cybermen.

"I just hope I don't bump into one on my time travels!"