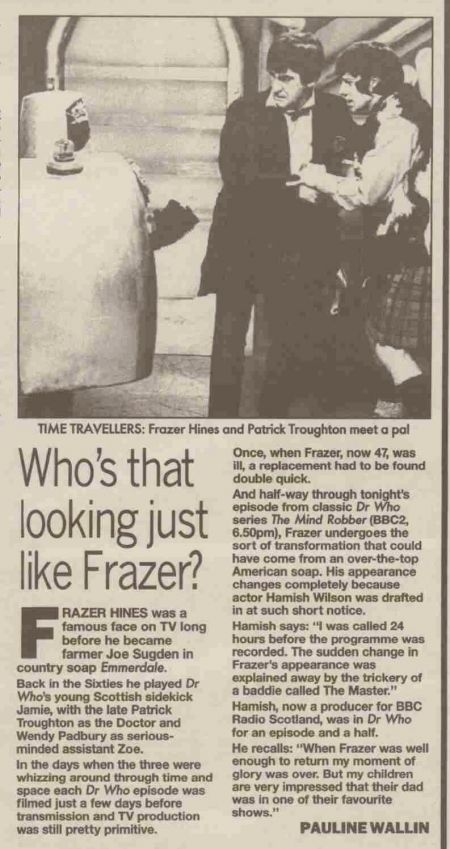 FHAZER HINES was a famous face on TV long before he became farmer Joe Sugden in country soap Emmerdale. Back in the Sixties he played Dr Who's young Scottish sidekick Jamie, with the late Patrick Troughton as the Doctor and Wendy Padbury as serious-minded assistant Zoe.

In the days when the three were whining around through time and space each Dr Who episode was filmed just a few days before transmission and TV production was still pretty primitive.

Once, when Frazer, now 47, was ill, a replacement had to be found double quick.

And half-way through tonight's episode from classic Dr Who series The Mind Robber (BBC2, 6.50pm), Frazer undergoes the sort of transformation that could have come from an over-the-top American soap. His appearance changes completely because actor Hamish Wilson was drafted in at such short notice.

Hamish says: "I was called 24 hours before the programme was recorded. The sudden change in Frazer's appearance was explained away by the trickery of a baddie called The Master." Hamish, now a producer for BBC Radio Scotland, was in Dr Who for an episode and a half.

He recalls: "When Frazer was well enough to return my moment of glory was over. But my children are very impressed that their dad was in one of their favourite shows."