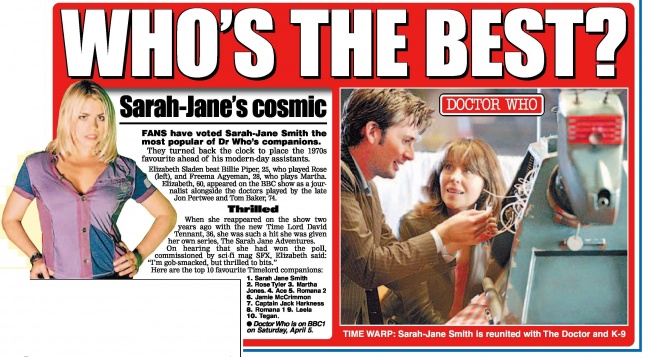 FANS have voted Sarah-Jane Smith the most popular of Dr Who's companions. They turned back the clock to place the 1970s favourite ahead of his modern-day assistants.

Elizabeth Sladen beat Billie Piper, 25, who played Rose (left), and Freema Agyeman, 28, who plays Martha. Elizabeth, 60, appeared on the BBC show as a journalist alongside the doctors played by the late Jon Pertwee and Tom Baker, 74.

When she reappeared on the show two years ago with the new Time Lord David Tennant, 36, she was such a hit she was given her own series, The Sarah Jane Adventures.

On hearing that she had won the poll, commissioned by sci-fi mag SFX, Elizabeth said: "I'm gob-smacked, but thrilled to bits."

Doctor Who is on BBC1 on Saturday, April 5.

Caption: TIME WARP: Sarah-Jane Smith is reunited with The Doctor and K-9