Who's the Joker in the cloak! 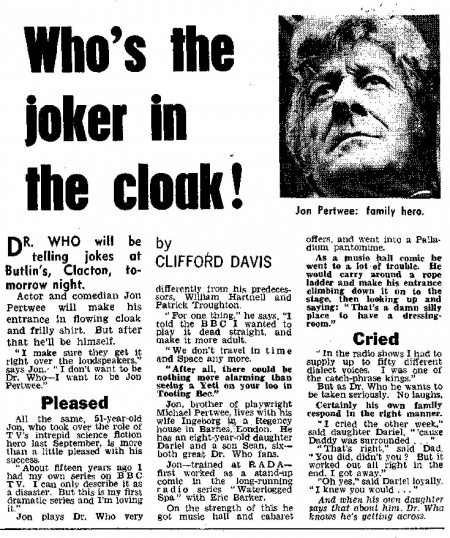 DR. WHO will be telling jokes at Butlin's, Clacton, tomorrow night.

Actor and comedian Jon Pertwee will make his entrance in flowing cloak and frilly shirt. But after that he'll be himself.

"I make sure they get it right over the loudspeakers," says Jon,- " I don't want to be Dr. Who--I want to be Jon Pertwee."

All the same, 51-year-old Jon, who took over the role of TV's intrepid science fiction hero last September, is more than a little pleased with his success.

"About fifteen years ago I had my own series on B B C T V. I can only describe it as a disaster. But this is my first dramatic series and I'm loving it."

"For one thing," he says, "I told the BBC I wanted to play it dead straight, and make it more adult.

"We don't travel In time and Space any more.

"After all, there could be nothing more alarming than seeing a Yeti on your loo in Tooting Bec."

Jon, brother of playwright Michael Pertwee, lives with his wife Ingeborg in a Regency house in Barnes, London. He has an eight-year-old daughter Dariel and a son Sean, six—both great Dr. Who fans.

Jon—trained at Ft A D A-first worked as a stand-up comic In the long-running radio series "Waterlogged Spa" with Eric Barker.

On the strength of this he got music hall and cabaret offers. and went into a Palladium pantomime.

As a music hall comic he went to a lot or trouble. He would carry around a rope ladder and make his entrance climbing down it on to the state, then looking up and saying: "That's a damn silly place to have a dressing-room."

"In the radio shows I had to supply up to fifty different dialect voices, I was one of the catch-phrase kings."

But as Dr. Who he wants to be taken seriously. No laughs.

Certainly his own family respond in the right manner.

"I cried the other week," said daughter Dariel, "'cause Daddy was surrounded . . "

And when his own daughter saps that about him. Dr. Who knows he's getting across.