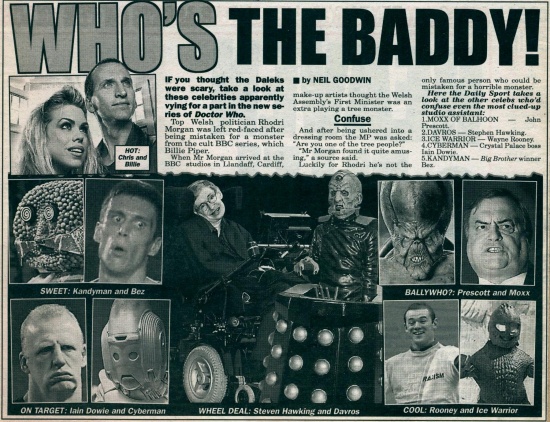 IF you thought the Daleks were scary, take a look at these celebrities apparently vying for a part in the new series of Doctor Who.

Top Welsh politician Rhodri Morgan was left red-faced after being mistaken for a monster from the cult BBC series, which Billie Piper.

When Mr Morgan arrived at the BBC studios in Llandaff, Cardiff, make-up artists thought the Welsh Assembly's First Minister was an extra playing a tree monster.

And after being ushered into a dressing room the MP was asked: "Are you one of the tree people?"

"Mr Morgan found it quite amusing," a source said.

Luckily for Rhodri he's not the only famous person who could be mistaken for a horrible monster.

Here the Daily Sport takes a look at the other celebs who'd confuse even the most clued-up studio assistant:

ON TARGET: Iain Dowie and Cyberman