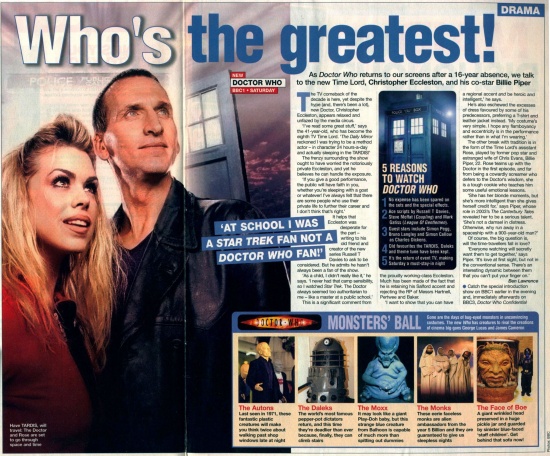 As Doctor Who returns to our screens after a 16-year absence, we talk to the new Time Lord, Christopher Eccleston, and his co-star Billie Piper

The TV comeback of the decade is here, yet despite the hype (and, there's been a lot), new Doctor, Christopher Eccleston, appears relaxed and unfazed by the media circus.

'I've read some great stuff,' says the 41-year-old, who has become the eighth TV Time Lord. 'The Daily Mirror reckoned I was trying to be a method actor - in character 24 hours-a-day and actually sleeping in the TARDIS!'

The frenzy surrounding the show ought to have worried the notoriously private Eccleston, and yet he believes he can handle the exposure.

'If you give a good performance, the public will have faith in you, whether you're sleeping with a goat or whatever! I've always felt that there are some people who use their private life to further their career and I don't think that's right.'

It helps that Eccleston was desperate for the part writing to his old friend and creator of the new series Russell T Davies to ask to be considered. But he admits he hasn't always been a fan of the show.

'As a child, I didn't really like it,' he says. 'I never had that camp sensibility, so I watched Star Trek. The Doctor always seemed too authoritarian to me - like a master at a public school.'

This is a significant comment from the proudly working-class Eccleston. Much has been made of the fact that he is retaining his Salford accent and rejecting the RP of Messrs Hartnell, Pertwee and Baker.

'I want to show that you can have a regional accent and be heroic and intelligent,' he says.

He's also eschewed the excesses of dress favoured by some of his predecessors, preferring a T-shirt and leather jacket instead. 'My costume's very simple. I hope any flamboyancy and eccentricity is in the performance rather than in what I'm wearing.'

The other break with tradition is in the form of the Time Lord's assistant Rose, played by former pop star and estranged wife of Chris Evans, Billie Piper, 22. Rose teams up with the Doctor in the first episode, and far from being a cowardly screamer who defers to the Doctor's wisdom, she is a tough cookie who teaches him some useful emotional lessons.

'She has her blonde moments, but she's more intelligent than she gives herself credit for,' says Piper, whose role in 2003's The Canterbury Tales revealed her to be a serious talent. 'She's not a damsel in distress. Otherwise, why run away in a spaceship with a 900-year-old man?'

Of course, the big question is, will the time-travellers fall in love?

'Everyone watching will secretly want them to get together,' says Piper. 'It's love at first sight, but not in the conventional sense. There's an interesting dynamic between them that you can't put your finger on.'

Catch the special introduction show on BBC1 earlier in the evening and, immediately afterwards on BBC3, Doctor Who Confidential

Caption: Have TARDIS, will travel: The Doctor and Rose are set to go through space and time

Gone are the days of hug-eyed monsters in unconvincing costumes. The new Who has creatures to rival the creations of cinema big-guns George Lucas and James Cameron

Last seen in 1971, these fantastic plastic creatures will make you think twice about walking past shop windows late at night

The world's most famous pepper-pot dictators return, and this time they're deadlier than ever because, finally, they can climb stairs

It may look like a giant Play-Doh baby, but this strange blue creature from Balhoon is capable of much more than spitting out dummies

The Face of Boe

A giant wrinkled head preserved in a huge pickle jar and guarded by sinister blue-faced 'staff children'. Get behind that sofa now!

5 REASONS TO WATCH DOCTOR WHO