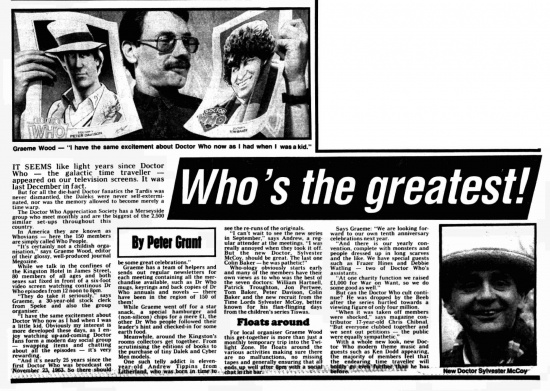 IT SEEMS like light years since Doctor Who — the galactic time traveller —appeared on our television screens. It was last December in fact.

But for all the die-hard Doctor fanatics the Tardis was never dismantled, the Daleks were never self-exterminated, nor was the memory allowed to become merely a time warp.

The Doctor Who Appreciation Society has a Merseyside group who meet monthly and are the biggest of the 2,500 similar set-ups throughout this country.

In America they are known as Whovians — here the 150 members are simply called Who People.

"It's certainly not a childish organisation," says Graeme Wood, editor of their glossy, well-produced journal Megozine.

While we talk in the confines of the Kingston Hotel in James Street, 80 members of all ages and both sexes sat fixed in front of a six-foot video screen watching continous Dr Who episodes from 12 noon to 8p.m.

"They do take it seriously." says Graeme, a 30-year-old stock clerk from Speke and also the group organiser.

"I have the same excitement about Doctor Who now as I had when I was a little kid. Obviously my interest is more developed these days, as I enjoy watching up-and-coming Doctor fans form a modern day social group — swapping items and chatting about all the episodes — it's very rewarding.

"And its nearly 25 years since the first Doctor Who was broadcast on November 23, 1963 So there should be some great celebrations."

Graeme has a team of helpers and sends out regular newsletters for each meeting containing all the merchandise available, such as Dr Who mugs, keyrings and back copies of Dr Who annuals and novels — there have been in the region of 150 of them!

While Graeme went off for a star snack, a special hamburger and (non-silicon) chips for a mere £1 the other Dr Who people followed their leader's hint and checked-in for some earth food.

Meanwhile, around the Kingston's rooms collectors get together. From scrutinising the editions of books to the purchase of tiny Dalek and Cyber Men models.

One such telly addict is eleven. year-old Andrew Tippins from Litherland, who was born in time to see the re-runs of the originals.

"I can't wait to see the new series in September," says Andrew, a regular attender at the meetings. "I was really annoyed when they took it off. But the new Doctor, Sylvester McCoy, should be great. The last one Colin Baker — he was pathetic!"

Who-ology obviously starts early and many of the members have their own views as to who was the best of the seven doctors: William Hartnell, Patrick Troughton, Jon Pertwee, Tom Baker, Peter Davison, Colin Baker and the new recruit from the Time Lords Sylvester McCoy, better known for his flan-flinging days from the children's series Tiswas.

For local organiser Graeme Wood this get-together is more than just a monthly temporary trip into the Twilight Zone. He floats around the various activities making sure there are no malfunctions, no missing tapes and generally ensuring that all ends up well after 8pm with a social duo in the bar.

Says Graeme: "We are looking forward to our own tenth anniversary celebrations next year.

"And there is our yearly convention. complete with monsters and people dressed up in long scarves and the like. We have special guests such as Frazer Hines and Debbie Watling — two of Doctor Who's assistants.

But can the Doctor Who cult continue? He was dropped by the Beeb after the series hurtled towards a viewing figure of only four million. "When it was taken off members were shocked," says magazine contributor 17-year-old Chris Chibnal. "But everyone clubbed together and we sent out petitions — the public were equally sympathetic."

With a whole new look, new Doctor Who modern theme music and guests such as Ken Dodd appearing, the majority of members feel that the endearing time traveller will boldly go even further than he has before.

Caption: Graeme Wood — "I have the same excitement about Doctor Who now as I had when I was a kid."