Who's this? Out of Tardis but in a taxi 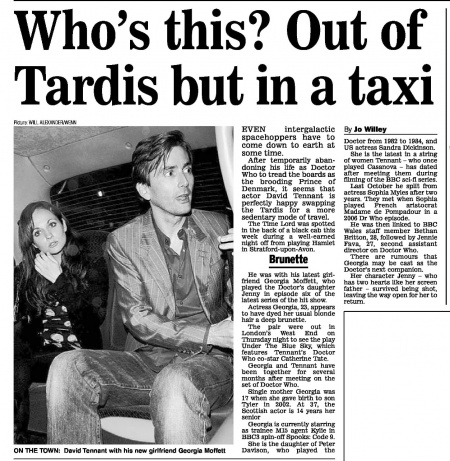 EVEN intergalactic spacehoppers have to come down to earth at some time.

After temporarily abandoning his life as Doctor Who to tread the boards as the brooding Prince of Denmark, it seems that actor David Tennant is perfectly happy swapping the Tardis for a more sedentary mode of travel.

The Time Lord was spotted in the back of a black cab this week during a well-earned night off from playing Hamlet in Stratford-upon-Avon.

He was with his latest girlfriend Georgia Moffett, who played the Doctor's daughter Jenny in episode six of the latest series of the hit show.

Actress Georgia, 23, appears to have dyed her usual blonde hair a deep brunette.

The pair were out in London's West End on Thursday night to see the play Under The Blue Sky, which features Tennant's Doctor Who co-star Catherine Tate.

Georgia and Tennant have been together for several months after meeting on the set of Doctor Who.

Single mother Georgia was 17 when she gave birth to son Tyler in 2002. At 37, the Scottish actor is 14 years her senior

She is the daughter of Peter Davison, who played the Doctor from 1982 to 1984, and US actress Sandra Dickinson.

She is the latest in a string of women Tennant - who once played Casanova - has dated after meeting them during filming of the BBC sci-fi series.

Last October he split from actress Sophia Myles after two years. They met when Sophia played French aristocrat Madame de Pompadour in a 2006 Dr Who episode.

He was then linked to BBC Wales staff member Bethan Britton, 28, followed by Jennie Fava, 27, second assistant director on Doctor Who.

There are rumours that Georgia may be cast as the Doctor's next companion.

Her character Jenny - who has two hearts like her screen father - survived being shot, leaving the way open for her to return.

Caption: ON THE TOWN: David Tennant with his new girlfriend Georgia Moffett