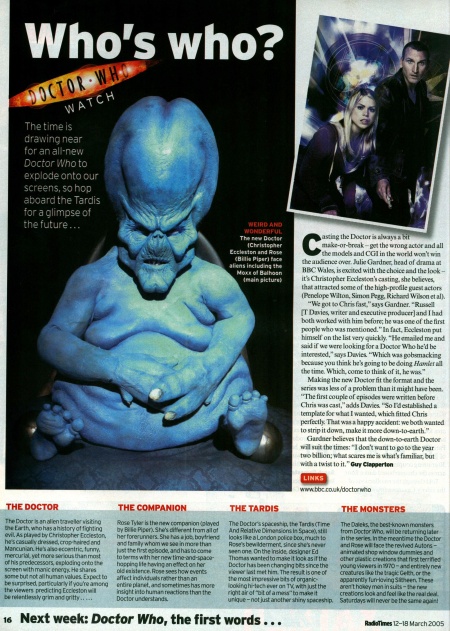 The time is drawing near for an all-new Doctor Who to explode onto our screens, so hop aboard the Tardis for a glimpse of the future...

Casting the Doctor is always a bit make-or-break — get the wrong actor and all the models and CGI in the world won't win the audience over. Julie Gardner, head of drama at BBC Wales, is excited with the choice and the look — it's Christopher Eccleston's casting, she believes, that attracted some of the high-profile guest actors (Penelope Wilton, Simon Pegg, Richard Wilson et al). "We got to Chris fast," says Gardner. "Russell [T Davies, writer and executive producer] and I had both worked with him before; he was one of the first people who was mentioned." In fact, Eccleston put himself on the list very quickly. "He emailed me and said if we were looking for a Doctor Who he'd be interested," says Davies. "Which was gobsmacking because you think he's going to be doing Hamlet all the time. Which, come to think of it, he was." Making the new Doctor fit the format and the series was less of a problem than it might have been. "The first couple of episodes were written before Chris was cast," adds Davies. "So I'd established a template for what I wanted, which fitted Chris perfectly. That was a happy accident we both wanted to strip it down, make it more down-to-earth." Gardner believes that the down-to-earth Doctor will suit the times: "I don't want to go to the year two billion; what scares me is what's familiar, but with a twist to it." Guy Clapperton

The Doctor is an alien traveller visiting the Earth, who has a history of fighting evil. As played by Christopher Eccleston, he's casually dressed, crop-haired and Mancunian. He's also eccentric, funny, mercurial, yet more serious than most of his predecessors, exploding onto the screen with manic energy. He shares some but not all human values. Expect to be surprised, particularly if you're among the viewers predicting Eccleston will be relentlessly grim and gritty .....

Rose Tyler is the new companion (played by Billie Piper). She's different from all of her forerunners. She has a job, boyfriend and family whom we see in more than just the first episode, and has to come to terms with her new time-and-spacehopping life having an effect on her old existence. Rose sees how events affect individuals rather than an entire planet, and sometimes has more insight into human reactions than the Doctor understands.

The Doctor's spaceship, the Tardis (Time And Relative Dimensions In Space), still looks like a London police box, much to Rose's bewilderment, since she's never seen one. On the inside, designer Ed Thomas wanted to make it look as if the Doctor has been changing bits since the viewer last met him. The result is one of the most impressive bits of organic-looking hi-tech ever on TV, with just the right air of "bit of a mess" to make it unique — not just another shiny spaceship.

The Daleks, the best-known monsters from Doctor Who, will be returning later in the series. In the meantime the Doctor and Rose will face the revived Autons — animated shop window dummies and other plastic creations that first terrified young viewers in 1970 — and entirely new creatures like the tragic Gelth, or the apparently fun-loving Slitheen. These aren't hokey men in suits — the new creations look and feel like the real deal. Saturdays will never be the same again!