Who's who? (Skyway News) 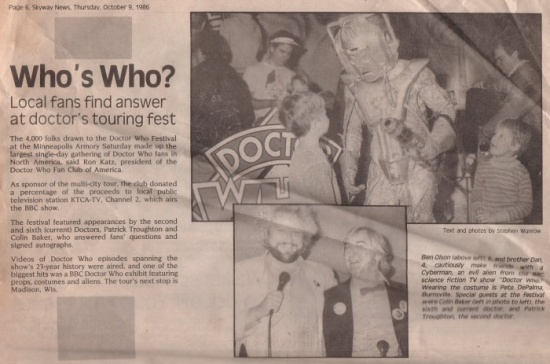 The 4,000 folks drawn to the Doctor Who festival at the Minneapolis Armory Saturday made up the largest single day gathering of Doctor Who fans in North America, said Ron Katz, president of the Dr. who fan club of America.

A sponsor of the multi-city tour, the club donated a percentage of the proceeds to local public television station KTCI-TV, Channel 2, which airs the BBC show.

The festival featured appearances by the second and sixth (current) Doctors, Patrick Troughton and Colin Baker, who answered fans questions and signed autographs.

Videos of Doctor Who episodes and spending the show's 23 history where aired, and one of the biggest hits was a BBC Doctor Who exhibit featuring props, costumes and aliens. The tour's next stop is Madison. Wis.

Caption: Ben Olson (above left), six, and brother Dan, 4, cautiously make friends with the Cybermen, an evil alien from the BBC science fiction TV show Doctor Who wearing the costume is Peter DePalma, Burnsville. Special guests at the festival were Colin Baker (left and photo to left), the sixth and current doctor, and Patrick Troughton, the second doctor.