Who's who in pop's Tardis 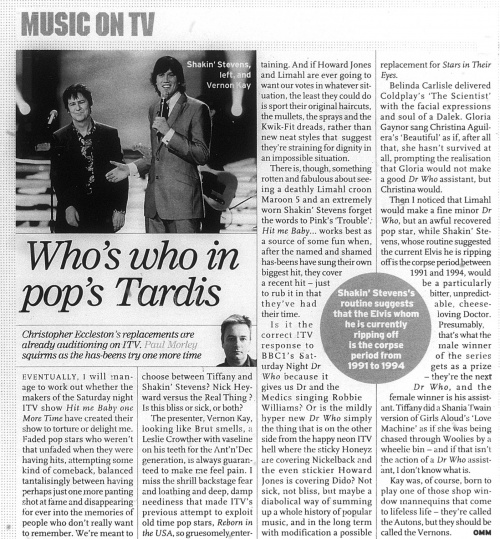 OMM: REVIEW: MUSIC ON TV: Who's who in pop's Tardis: Christopher Ecleston's replacements are already auditioning on ITV. Paul Morley squirms as the has-beens try one more time

Eventually, I will manage to work out whether the makers of the Saturday night ITV show Hit me Baby one More Time have created their show to torture or delight me. Faded pop stars who weren't that unfaded when they were having hits, attempting some kind of comeback, balanced tantalisingly between having perhaps just one more panting shot at fame and disappearing for ever into the memories of people who don't really want to remember. We're meant to choose between Tiffany and Shakin' Stevens? Nick Heyward versus the Real Thing ? Is this bliss or sick, or both?

The presenter, Vernon Kay, looking like Brut smells, a Leslie Crowther with vaseline on his teeth for the Ant'n'Dec generation, is always guaranteed to make me feel pain. I miss the shrill backstage fear and loathing and deep, damp neediness that made ITV's previous attempt to exploit old time pop stars, Reborn in the USA , so gruesomely entertaining. And if Howard Jones and Limahl are ever going to want our votes in whatever situation, the least they could do is sport their original haircuts, the mullets, the sprays and the Kwik-Fit dreads, rather than new neat styles that suggest they're straining for dignity in an impossible situation.

There is, though, something rotten and fabulous about seeing a deathly Limahl croon Maroon 5 and an extremely worn Shakin' Stevens forget the words to Pink's 'Trouble'. Hit me Baby... works best as a source of some fun when, after the named and shamed has-beens have sung their own biggest hit, they cover a recent hit - just to rub it in that they've had their time.

Is it the correct ITV response to BBC1's Saturday Night Dr Who because it gives us Dr and the Medics singing Robbie Williams? Or is the mildly hyper new Dr Who simply the thing that is on the other side from the happy neon ITV hell where the sticky Honeyz are covering Nickelback and the even stickier Howard Jones is covering Dido? Not sick, not bliss, but maybe a diabolical way of summing up a whole history of popular music, and in the long term with modification a possible replacement for Stars in Their Eyes

Belinda Carlisle delivered Coldplay's 'The Scientist' with the facial expressions and soul of a Dalek. Gloria Gaynor sang Christina Aguilera's 'Beautiful' as if, after all that, she hasn't survived at all, prompting the realisation that Gloria would not make a good Dr Who assistant, but Christina would.

Then I noticed that Limahl would make a fine minor Dr Who , but an awful recovered pop star, while Shakin' Stevens, whose routine suggested the current Elvis he is ripping off is the corpse period between 1991 and 1994, would be a particularly bitter, unpredictable, cheese-loving Doctor. Presumably, that's what the male winner of the series gets as a prize - they're the next Dr Who , and the female winner is his assistant. Tiffany did a Shania Twain version of Girls Aloud's 'Love Machine' as if she was being chased through Woolies by a wheelie bin - and if that isn't the action of a Dr Who assistant, I don't know what is.

Kay was, of course, born to play one of those shop window mannequins that come to lifeless life - they're called the Autons, but they should be called the Vernons.