Who's who of monsters 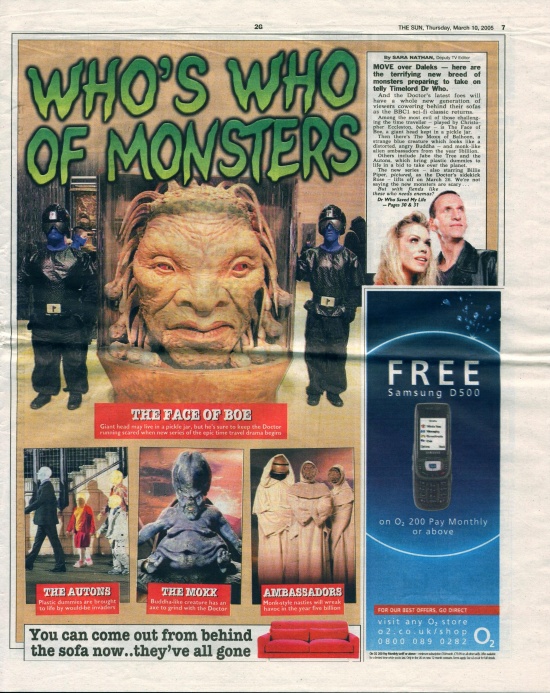 MOVE over Daleks — here are the terrifying new breed of monsters preparing to take on telly Timelord Dr Who.

And the Doctor's latest foes will have a whole new generation of viewers cowering behind their sofas as the BBC1 sci-fi classic returns.

Among the most evil of those challenging the time traveller — played by Christopher Eccleston, below — is The Face of Boe, a giant head kept in a pickle jar.

Then there's The Moxx of Balhoon, a strange blue creature which looks like a distorted, angry Buddha — and monk-like alien ambassadors from the year 5billion.

Others include Jabe the Tree and the Autons, which bring plastic dummies to life in a bid to take over the planet.

The new series — also starring Billie Piper, pictured, as the Doctor's sidekick Rose — lifts off on March 26. We're not saying the new monsters are scary ...

THE FACE OF BOE

Giant head may live in a pickle jar, but he's sure to keep the Doctor running scared when new series of the epic time travel drama begins

Plastic dummies are brought to life by would-be invaders

Buddha-like creature has an axe to grind with the Doctor

Monk-style nasties will wrea, havoc in the year five billion

You can come out from behind the sofa now..they've all gone