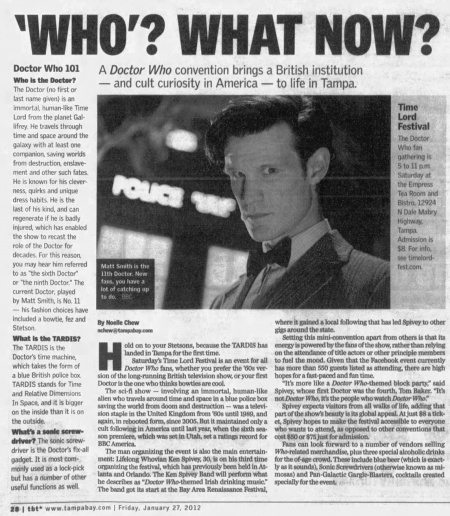 HIGHLIGHT: A Doctor Who convention brings a British institution - and cult curiosity in America - to life in Tampa.

Hold on to your Stetsons, because the TARDIS has landed in Tampa for the first time.

Saturday's Time Lord Festival is an event for all Doctor Who fans, whether you prefer the '60s version of the long-running British television show, or your first Doctor is the one who thinks bowties are cool.

The sci-fi show - involving an immortal, human-like alien who travels around time and space in a blue police box saving the world from doom and destruction - was a television staple in the United Kingdom from '60s until 1989, and again, in rebooted form, since 2005. But it maintained only a cult following in America until last year, when the sixth season premiere, which was set in Utah, set a ratings record for BBC America.

The man organizing the event is also the main entertainment: Lifelong Whovian Ken Spivey, 30, is on his third time organizing the festival, which has previously been held in Atlanta and Orlando. The Ken Spivey Band will perform what he describes as "Doctor Who-themed Irish drinking music." The band got its start at the Bay Area Renaissance Festival, where it gained a local following that has led Spivey to other gigs around the state.

Setting this mini-convention apart from others is that its energy is powered by the fans of the show, rather than relying on the attendance of title actors or other principle members to fuel the mood. Given that the Facebook event currently has more than 550 guests listed as attending, there are high hopes for a fast-paced and fun time.

"It's more like a Doctor Who-themed block party," said Spivey, whose first Doctor was the fourth, Tom Baker. "It's not Doctor Who, it's the people who watch Doctor Who."

Spivey expects visitors from all walks of life, adding that part of the show's beauty is its global appeal. At just $8 a ticket, Spivey hopes to make the festival accessible to everyone who wants to attend, as opposed to other conventions that cost $50 or $75 just for admission.

Fans can look forward to a number of vendors selling Who-related merchandise, plus three special alcoholic drinks for the of-age crowd. These include blue beer (which is exactly as it sounds), Sonic Screwdrivers (otherwise known as mimosas) and Pan-Galactic Gargle-Blasters, cocktails created specially for the event.

The Doctor Who fan gathering is 5 to 11 p.m. Saturday at the Empress Tea Room and Bistro, 12924 N Dale Mabry Highway, Tampa. Admission is $8. For info, see timelordfest.com.

Who is the Doctor? The Doctor (no first or last name given) is an immortal, human-like Time Lord from the planet Gallifrey. He travels through time and space around the galaxy with at least one companion, saving worlds from destruction, enslavement and other such fates. He is known for his cleverness, quirks and unique dress habits. He is the last of his kind, and can regenerate if he is badly injured, which has enabled the show to recast the role of the Doctor for decades. For this reason, you may hear him referred to as "the sixth Doctor" or "the ninth Doctor." The current Doctor, played by Matt Smith, is No. 11 - his fashion choices have included a bowtie, fez and Stetson.

What is the TARDIS? The TARDIS is the Doctor's time machine, which takes the form of a blue British police box. TARDIS stands for Time and Relative Dimensions In Space, and it is bigger on the inside than it is on the outside.

The Doctor Who fan gathering is 5 to 11 p.m. Saturday at the Empress Tea Room and Bistro, 12924 N Dale Mabry Highway, Tampa. Admission is $8. For info, see timelordfest.com.

GRAPHIC: PHOTO: Matt Smith is the 11th Doctor. New fans, you have a lot of catching up to do. BBC