Who's a Lucky Boy 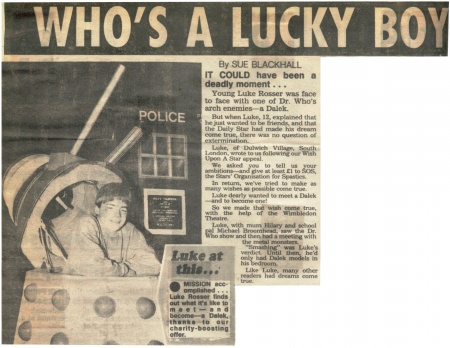 IT COULD have been a deadly moment ...

Young Luke Rosser was face to face with one of Dr. Who's arch enemies—a Dalek.

But when Luke, 12, explained that he just wanted to be friends, and that the Daily Star had made his dream come true, there was no question of extermination.

Luke, of Dulwich Village, South London, wrote to us following our Wish Upon A Star appeal.

We asked you to tell us your ambitions—and give at least £1 to SOS, the Stars' Organisation for Spastics.

In return, we've tried to make as many wishes as possible come true.

Luke dearly wanted to meet a Dalek —and to become one!

So we made that wish come true, with the help of the Wimbledon Theatre.

Luke, with mum Hilary and school pal Michael Broomhead, saw the Dr. Who show and then had a meeting with the metal monsters. "Smashing" was Luke's verdict. Until then, he'd only had Dalek models in his bedroom.

Like Luke, many other readers had dreams come true.

MISSION accomplished ... Luke Rosser finds out what it's like to meet—and become—a Dalek, thanks to our charity-boosting offer.