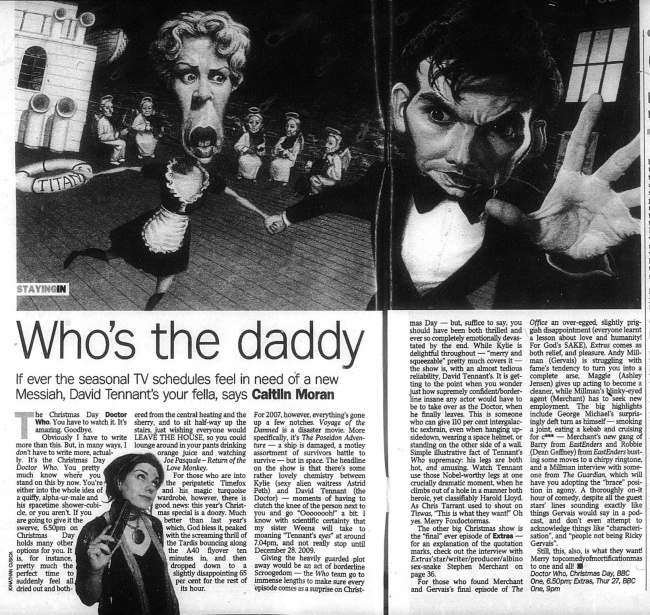 If ever the seasonal TV schedules feel in need of a new Messiah, David Tennant's your fella, says Caitlin Moran

The Christmas Day Doctor Who. You have to watch it. It's amazing. Goodbye.

Obviously I have to write more than this. But, in many ways, I don't have to write more, actually. It's the Christmas Day Doctor Who. You pretty much know where you stand on this by now. You're either into the whole idea of a quiffy, alpha-ur-male and his spacetime shower-cubicle, or you aren't. If you are going to give it the swerve, 6.50pm on Christmas Day holds many other options for you. It is, for instance, pretty much the perfect time to suddenly feel all dried out and bothered from the central heating and the sherry, and to sit half-way up the stairs, just wishing everyone would LEAVE THE HOUSE, so you could lounge around in your pants drinking orange juice and watching Joe Pasquale - Return of the Love Monkey.

For those who are into the peripatetic Timefox and his magic turquoise wardrobe, however, there is good news: this year's Christmas special is a doozy. Much better than last year's which, God bless it, peaked with the screaming thrill of the Tardis bouncing along the A40 flyover ten minutes in, and then dropped down to a slightly disappointing 65 per cent for the rest of its hour.

For 2007, however, everything's gone up a few notches. Voyage of the Damned is a disaster movie. More specifically, it's The Poseidon Adventure — a ship is damaged, a motley assortment of survivors battle to survive — but in space. The headline on the show is that there's some rather lovely chemistry between Kylie (sexy alien waitress Astrid Peth) and David Tennant (the Doctor) — moments of having to clutch the knee of the person next to you and go "Oooooooh!" a bit 1 know with scientific certainty that my sister Weena will take to moaning "Tennant's eyes" at around 7.04pm, and not really stop until December 28, 2009.

Giving the heavily guarded plot away would be an act of borderline Scroogedom -- the Who team go to immense lengths to make sure every episode comes as a surprise on Christmas Day — but, suffice to say, you should have been both thrilled and ever so completely emotionally devastated by the end. While Kylie is delightful throughout — "merry and squeezable" pretty much covers it —the show is, with an almost tedious reliability, David Tennant's. It is getting to the point when you wonder just how supremely confident/border-line insane any actor would have to be to take over as the Doctor, when he finally leaves. This is someone who can give 110 per cent intergalactic sexbrain, even when hanging upsidedown, wearing a space helmet, or standing on the other side of a wall. Simple illustrative fact of Tennant's Who supremacy: his legs are both hot, and amusing. Watch Tennant use those Nobel-worthy legs at one crucially dramatic moment, when he climbs out of a hole in a manner both heroic, yet classifiably Harold Lloyd. As Chris Tarrant used to shout on Tiswas, 'This is what they want!" Oh yes. Merry Foxdoctormas.