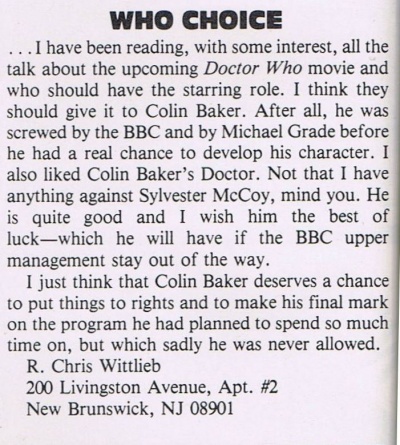 ...I have been reading, with some interest, all the talk about the upcoming Doctor Who movie and who should have the starring role. I think they should give it to Colin Baker. After all, he was screwed by the BBC and by Michael Grade before he had a real chance to develop his character. I also liked Colin Baker's Doctor. Not that I have anything against Sylvester McCoy, mind you. He is quite good and I wish him the best of luck—which he will have if the BBC upper management stay out of the way.

I just think that Colin Baker deserves a chance to put things to rights and to make his final mark on the program he had planned to spend so much time on, but which sadly he was never allowed.