Who Goes There (Evening Chronicle) 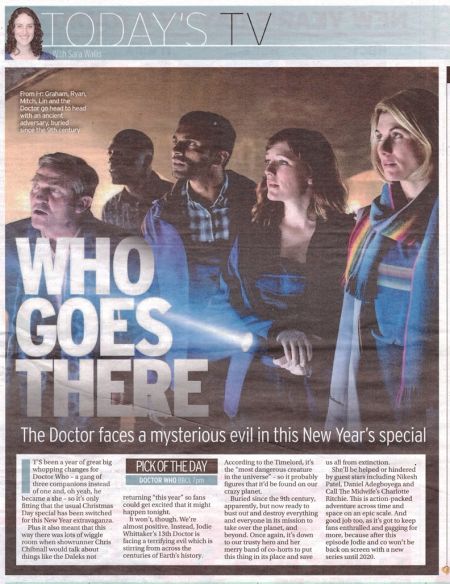 The Doctor faces a mysterious evil in this New Year's special

PICK OF THE DAY

IT'S been a year of great big whopping changes for Doctor Who - a gang of three companions instead of one and, oh yeah, he became a she - so it's only fitting that the usual Christmas Day special has been switched for this New Year extravaganza.

Plus it also meant that this way there was lots of wiggle room when showrunner Chris Chibnall would talk about things like the Daleks not returning "this year" so fans could get excited that it might happen tonight.

It won't, though. We're almost positive. Instead, Jodie Whittaker's 13th Doctor is facing a terrifying evil which is stirring from across the centuries of Earth's history. According to the Timelord, it's the "most dangerous creature in the universe - so it probably figures that it'd be found on our crazy planet.

Buried since the 9th century, apparently, but now ready to bust out and destroy everything and everyone in its mission to take over the planet, and beyond. Once again, it's down to our trusty hero and her merry band of co-horts to put this thing in its place and save us all from extinction.

She'll be helped or hindered by guest stars including Nikesh Patel, Daniel Adegboyega and Call The Midwife's Charlotte Ritchie. This is action-packed adventure across time and space on an epic scale. And good job too, as it's got to keep fans enthralled and gagging for more, because after this episode Jodie and co won't be back on screen with a new series until 2020.

Caption: From l-r: Graham, Ryan, Mitch, Lin and the Doctor go head to head with an ancient adversary, buried since the 9th century