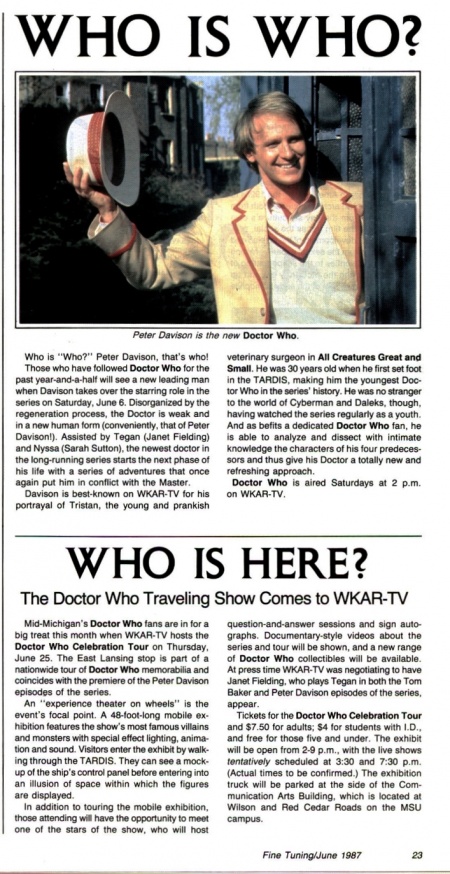 Who is "Who?" Peter Davison, that's who!

Those who have followed Doctor Who for the past year-and-a-half will see a new leading man when Davison takes over the starring role in the series on Saturday. June 6. Disorganized by the regeneration process, the Doctor is weak and in a new human form (conveniently, that of Peter Davison!). Assisted by Tegan (Janet Fielding) and Nyssa (Sarah Sutton), the newest doctor in the long-running series starts the next phase of his life with a series of adventures that once again put him in conflict with the Master.

Davison is best-known on WKAR-TV for his portrayal of Tristan, the young and prankish veterinary surgeon in All Creatures Great and Small. He was 30 years old when he first set foot in the TARDIS, making him the youngest Doctor Who in the series' history. He was no stranger to the world of Cyberman and Daleks, though, having watched the series regularly as a youth. And as befits a dedicated Doctor Who fan, he is able to analyze and dissect with intimate knowledge the characters of his four predecessors and thus give his Doctor a totally new and refreshing approach.

Doctor Who is aired Saturdays at 2 p.m. on WKAR-TV.

Caption: Peter Davison is the new Doctor Who.

The Doctor Who Traveling Show Comes to WKAR-TV

Mid-Michigan's Doctor Who fans are in for a big treat this month when WKAR-TV hosts the Doctor Who Celebration Tour on Thursday, June 25. The East Lansing stop is part of a nationwide tour of Doctor Who memorabilia and coincides with the premiere of the Peter Davison episodes of the series.

An "experience theater on wheels" is the event's focal point. A 48-foot-long mobile exhibition features the show's most famous villains and monsters with special effect lighting, animation and sound. Visitors enter the exhibit by walking through the TARDIS. They can see a mockup of the ship's control panel before entering into an illusion of space within which the figures are displayed.

In addition to touring the mobile exhibition, those attending will have the opportunity to meet one of the stars of the show, who will host question-and-answer sessions and sign autographs. Documentary-style videos about the series and tour will be shown, and a new range of Doctor Who collectibles will be available. At press time WKAR-TV was negotiating to have Janet Fielding, who plays Tegan in both the Tom Baker and Peter Davison episodes of the series, appear.

Tickets for the Doctor Who Celebration Tour and $7.50 for adults; $4 for students with I.D., and free for those five and under. The exhibit will be open from 2-9 p.m., with the live shows tentatively scheduled at 3:30 and 7:30 p.m. (Actual times to be confirmed.) The exhibition truck will be parked at the side of the Communication Arts Building, which is located at Wilson and Red Cedar Roads on the MSU campus.