Who Lets The Dog Out 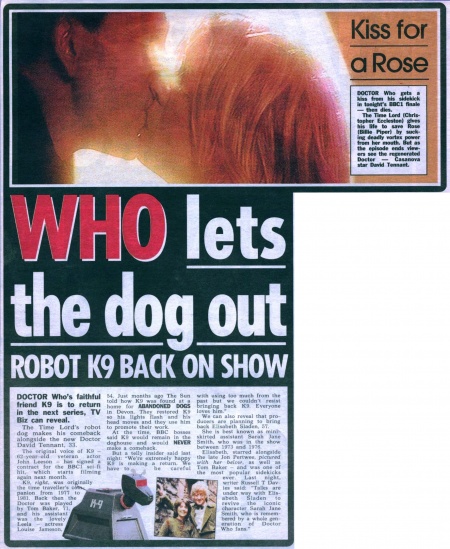 ROBOT K9 BACK ON SHOW

DOCTOR Who's faithful friend K9 is to return in the next series, TV Biz can reveal.

The original voice of K9 —62-year-old veteran actor John Leeson — has signed a contract for the BBC1 sci-fi hit, which starts filming again next month.

K9, right, was originally the time traveller's companion from 1977 to 1981. Back then the Doctor was played by Tom Baker. 71. and his assistant was the lovely Leela -- actress Louise Jameson, 54. Just months ago The Sun told how K9 was found at a home for ABANDONED DOGS in Devon. They restored K9 so his lights flash and his head moves and they use him to promote their work.

At the time, BBC bosses said K9 would remain in the doghouse and would NEVER make a comeback.

But a telly insider said last night: "We're extremely happy K9 is making a return. We have to be careful with using too much from the past but we couldn't resist bringing back K9. Everyone loves him."

We can also reveal that producers are planning to bring back Elisabeth Sladen, 57.

She is best known as miniskirted assistant Sarah Jane Smith, who was in the show between 1973 and 1976.

Elisabeth, starred alongside the late Jon Pertwee, pictured with her below, as well as Tom Baker — and was one of the most popular sidekicks ever. Last night, writer Russell T Davies said: "Talks are under way with Elisabeth Sladen to revive the iconic character Sarah Jane Smith. who is remembered by a whole generation of Doctor Who fans."

DOCTOR Who gets a kiss from his sidekick in tonight's BBC1 finale — then dies.

The Time Lord (Christopher Eccleston) gives his life to save Rose (Billie Piper) by sucking deadly vortex power from her mouth. But as the episode ends viewers see the regenerated Doctor — Casanova star David Tennant.