Who are ya? (Daily Record) 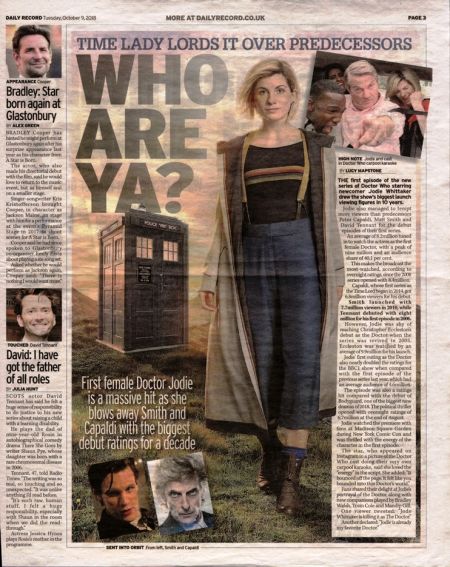 TIME LADY LORDS IT OVER PREDECESSORS

An average of 8.2million tuned in to watch the actress as the first female Doctor, with a peak of nine million and an audience share of 40.1 per cent.

This makes the broadcast the most-watched, according to overnight ratings, since the 2008 series opened with 8.4million. Capaldi, whose first series as the Time Lord began in 2014, got 6.8million viewers for his debut.

Smith launched with 7.7million viewers in 2010, while Tennant debuted with eight million for his first episode in 2006.

However, Jodie was shy of reaching Christopher Eccleston's debut as the Doctor when the series was revived in 2005. Eccleston was watched by an average of 9.9million for his launch.

Jodie' first outing as the Doctor also nearly doubled the ratings for the BBC1 show when compared with the first episode of the previous series last year, which had an average audience of 4.6million.

The episode was also a ratings hit compared with the debut of Bodyguard, one of the biggest new dramas of 2018. The political thriller opened with overnight ratings of 6.7million at the end of August.

Jodie watched the premiere with fans at Madison Square Garden during New York Comic Con and was thrilled with the energy of the character in the first episode.

The star, who appeared on Instagram in a picture of the Doctor Who cast doing their very own carpool karaoke, said she loved the "energy" in the script. She added: "It bounced off the page. It felt like you bounded into this Doctor's world."

Fans shared their delight at Jodie's portrayal of the Doctor, along with new companions played by Bradley Walsh, Tosin Cole and Mandip Gi11.

One viewer tweeted: "Jodie Whittaker is killing it as The Doctor."

Another declared: Jodie is already my favorite Doctor"

Caption: SENT INTO ORBIT From left, Smith and Capaldi

David: I have got the father of all roles

SCOTS actor David Tennant has said he felt a huge sense of responsibility to do justice to his new series about raising a child with a learning disability.

He plays the dad of nine-year-old Rosie in autobiographical comedy drama There She Goes by writer Shaun Pye, whose daughter was born with a rare chromosomal disease in 2006.

Tennant, 47, told Radio Times: "The writing was so real, so touching and so unexpected. "It was unlike anything I'd read before.

"It's such raw, human stuff, I felt a huge responsibility, especially with Shaun in the room when we did the read-through"