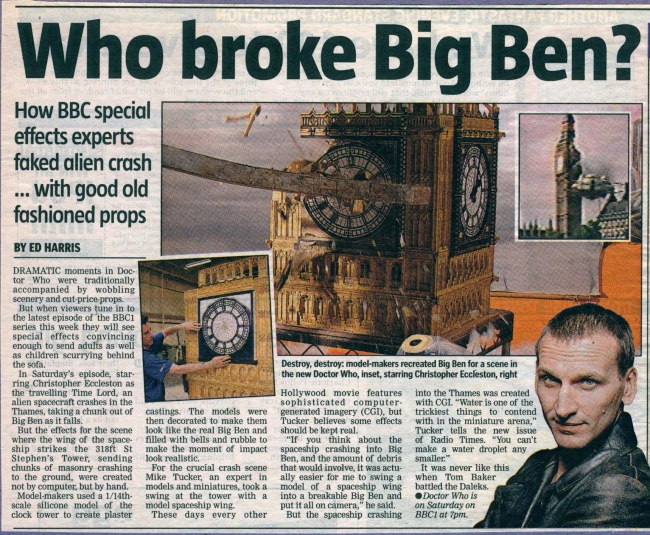 DRAMATIC moments in Doctor Who were traditionally accompanied by wobbling scenery and cut-price props. But when viewers tune in to the latest episode of the BBC1 series this week they will see special effects convincing enough to send adults as well as children scurrying behind the sofa.

In Saturday's episode, starring Christopher Eccleston as the travelling Time Lord, an alien spacecraft crashes in the Thames, taking a chunk out of Big Ben as it falls.

But the effects for the scene where the wing of the spaceship strikes the 318ft St Stephen's Tower, sending chunks of masonry crashing to the ground, were created not by computer, but by hand. Model-makers used a 1/14th-scale silicone model of the clock tower to create plaster castings. The models were then decorated to make them look like the real Big Ben and filled with bells and rubble to make the moment of impact look realistic.

For the crucial crash scene Mike Tucker, an expert in models and miniatures, took a swing at the tower with a model spaceship wing.

These days every other Hollywood movie features sophisticated computer-generated imagery (CGI), but Tucker believes some effects should be kept real.

"If you think about the spaceship crashing into Big Ben, and the amount of debris that would involve, it was actually easier for me to swing a model of a spaceship wing into a breakable Big Ben and put it all on camera," he said. But the spaceship crashing into the Thames was created with CGI. "Water is one of the trickiest things to contend with in the miniature arena," Tucker tells the new issue of Radio Times. "You can't make a water droplet any smaller "

It was never like this when Tom Baker battled the Daleks.

Doctor Who is on Saturday on BBC1 at 7pm.