Who can save lacklustre schedules for some festive fun 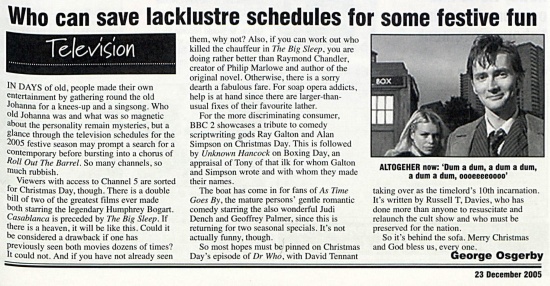 IN DAYS of old, people made their own entertainment by gathering round the old Johanna for a knees-up and a singsong. Who old Johanna was and what was so magnetic about the personality remain mysteries, but a glance through the television schedules for the 2005 festive season may prompt a search for a contemporary before bursting into a chorus of Roll Out The Barrel. So many channels, so much rubbish.

Viewers with access to Channel 5 are sorted for Christmas Day, though. There is a double bill of two of the greatest films ever made both starring the legendary Humphrey Bogart. Casablanca is preceded by The Big Sleep. If there is a heaven, it will be like this. Could it be considered a drawback if one has Previously seen both movies dozens of times? It could not. And if you have not already seen them, why not? Also, if you can work out who killed the chauffeur in The Big Sleep, you are doing rather better than Raymond Chandler, creator of Philip Marlowe and author of the original novel. Otherwise, there is a sorry dearth a fabulous fare. For soap opera addicts, help is at hand since there are larger-than-usual fixes of their favourite lather.

For the more discriminating consumer, BBC 2 showcases a tribute to comedy scriptwriting gods Ray Galton and Alan Simpson on Christmas Day. This is followed by Unknown Hancock on Boxing Day, an appraisal of Tony of that ilk for whom Gallon and Simpson wrote and with whom they made their names.

The boat has come in for fans of As Time Goes By, the mature persons' gentle romantic comedy starring the also wonderful Judi Dench and Geoffrey Palmer, since this is returning for two seasonal specials. It's not actually funny, though.

So most hopes must be pinned on Christmas Day's episode of Dr Who, with David Tennant taking over as the timelord's 10th incarnation. It's written by Russell T, Davies, who has done more than anyone to resuscitate and relaunch the cult show and who must be preserved for the nation.

So it's behind the sofa. Merry Christmas and God bless us, every one.