Who could resist it? 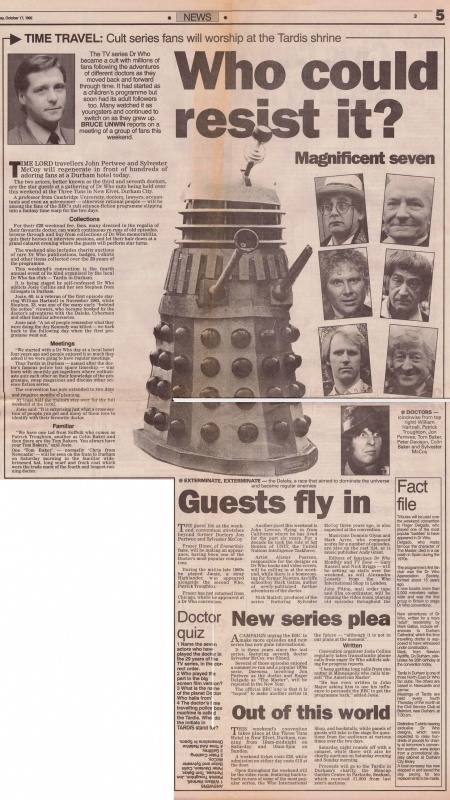 The TV series Dr Who became a cult with millions of fans following the adventures of different doctors as they moved back and forward through time. It had started as a children's programme but soon had its adult followers too. Many watched it as youngsters and continued to switch on as they grew up. BRUCE UNWIN reports on a meeting of a group of fans this weekend.

TIME LORD travellers John Pertwee and Sylvester McCoy will regenerate in front of hundreds of adoring fans at a Durham hotel today. The two actors, better known as the third and seventh doctors,

are the star guests at a gathering of Dr Who nuts being held over this weekend at the Three Tuns in New Elvet, Durham City.

A professor from Cambridge University, doctors, lawyers, accountants and even an astronomer — otherwise rational people — will be among the fans of the BBC's cult science-fiction programme slipping into a fantasy time warp for the two days.

For their £28 weekend fee, fans, many dressed in the regalia of their favourite doctor, can watch continuous re-runs of old episodes, browse through and buy from collections of Dr Who memorabilia, quiz their heroes in interview sessions, and let their hair down at a grand cabaret evening where the guests will perform star turns.

The weekend also includes charity auctions of rare Dr Who publications, badges, t-shirts and other items collected over the 29 years of the programme.

This weekend's convention is the fourth annual event of its kind organised by the local Dr Who fan club — Tardis in Durham.

It is being staged by self-confessed Dr Who addicts Josie Collins and her son Stephen from Gilesgate in Durham.

Josie, 60, is a veteran of the first episode starring William Hartnell in November 1963, while Stephen, 33, was one of the many early "behind the settee" viewers, who became hooked by the doctor's adventures with the Daleks, Cybermen and other familiar adversaries.

Josie said: "A lot of people remember what they were doing the day Kennedy was killed — we hark back to the following day when the first programme went out.

"We started with a Dr Who day at a local hotel four years ago and people enjoyed it so much they asked if we were going to have regular meetings."

Thus Tardis in Durham — named after the doctor's famous police box space timeship — was born with monthly get-togethers where enthusiasts quiz each other on their knowledge of the programme, swap magazines and discuss other science fiction series.

The convention has now extended to two days and requires months of planning.

At least half the visitors stay-over for the full weekend at the hotel.

Josie said: "It is surprising just what a cross-section of people you get and many of them love to identify with their favourite doctor.

"We have one lad from Suffolk who comes as Patrick Troughton, another as Colin Baker and then there are the Tom Bakers. You always have your Tom Bakers," said Josie.

One 'Tom Baker' — normally 'Chris from Newcastle' — will be seen on the train to Durham on Saturday morning in the familiar wide-brimmed hat, long scarf and frock coat which were the trade mark of the fourth and longest-running doctor.

Caption: EXTERMINATE, EXTERMINATE — the Daleks, a race that aimed to dominate the universe and became regular enemies

THE guest list at the weekend convention stretches beyond former Doctors Jon Pertwee and Sylvester McCoy.

Fraser Hines, of Emmerdale fame, will be making an appearance, having been one of the Doctor's most popular companions.

During the mid-to-late 1960s he played Jamie, a stray Highlander, who appeared alongside the second Who, Patrick Troughton.

Fraser has just returned from Chicago, where he appeared at a Dr Who convention.

Another guest this weekend is John Levene, flying in from California where he has lived for the past six years. For a decade he took the role of Sgt Benton of UNIT, the United Nations Intelligence Taskforce.

Artist Alister Pearson, responsible for the designs on Dr Who books and video covers, will be calling in at the weekend, while there is a homecoming for former Newton Aycliffe schoolboy Mark Gatiss, author of newly-published further adventures of the doctor.

McCoy three years ago, is also expected at the convention.

Musicians Dominic Glynn and Mark Ayres, who composed scores for a number of episodes, are also on the cast list, as is music publisher Andy Grant.

Editors of fanzines Dr Who Monthly and TV Zone — Gary Russell and Nick Briggs — will be setting up stalls over the weekend, as will Alexandra Loosely from the Who International Shop in London.

John Fitton, mail order tape and film co-ordinator, will be running the video room, playing old episodes throughout the

A CAMPAIGN urging the BBC to make more episodes and new series has now gone international. It is three years since the last series, featuring seventh doctor Sylvester McCoy, was filmed.

Several of those episodes enjoyed a summer re-run and a popular 1970s serie, Daemons, involving Jon Pertwee as the doctor and Roger Delgado as "The Master", will be repeated in the New Year.

The official BBC line is that it is "hoped" to make another series in the future — "although it is not in our plans at the moment".

"I keep getting long calls from one nutter in Minneapolis who calls himself 'The American Master'.

"He has even written to John Major asking him to use his influence to persuade the BBC to get the programme back," added Josie.

THIS weekend's convention takes place at the Three Tuns Hotel in New Elvet, Durham, running from 10am-midnight on Saturday and 10am-5pm on Sunday.

A weekend ticket costs £28, while admission on either day costs £15 at the door.

Open throughout the weekend will be the video room, featuring back-to-back re-runs of some of the most popular series, the Who International Shop, and bookstalls, while panels of guests will take to the stage for questions from the audience at various times over the two days.

Saturday night rounds off with a cabaret, while there will also be charity auctions on Saturday evening and Sunday morning.

Proceeds will go to the Tardis in Durham's charity, the Mencap Garden Centre in Parkside, Seaham, which received £1,000 from last year's auctions.

1 Name the seven actors who have played the doctor in the 29 years of the TV series, in the correct order.

2 Who played the part in the big screen film version?

3 What is the name of the planet Doctor Who hails from?

4 The doctor's time travelling police box machine is called the Tardis. What do the initials in TARDIS stand for?

Tributes will be paid over the weekend convention to Roger Delgado, who played one of the most popular "baddies" to have appeared in Dr Who.

Delgado, who made famous the character of The Master, died in a car crash in Spain during the 1970s.

The programme's first fan club was the Dr Who Appreciation Society, formed about 15 years ago.

It now boasts more than 2,000 members nationwide and was the first group in Britain to stage Dr Who conventions.

New adventures of Dr Who, written for a more "adult" readership by Mark Gatiss, include references to Durham Cathedral, which the time travelling doctor is supposed to have witnessed under construction.

Tardis in Durham is one of three North-East Dr Who fan clubs. The others are based in Newcastle and Jarrow.

Meetings of Tardis are held every fourth Thursday of the month at the Civil Service Club at Belmont, near Durham, at 7.30 pm.

Distinctive T-shirts bearing exclusive Dr Who designs, which were expected to raise hundreds of pounds for charity at tomorrow's convention auction, were stolen from a promotional display cabinet at Durham City library.

A local company has now stepped in and saved the day, paying for two replacements to be made.