Who do you do-- it's Leela, the Doctor's new girl 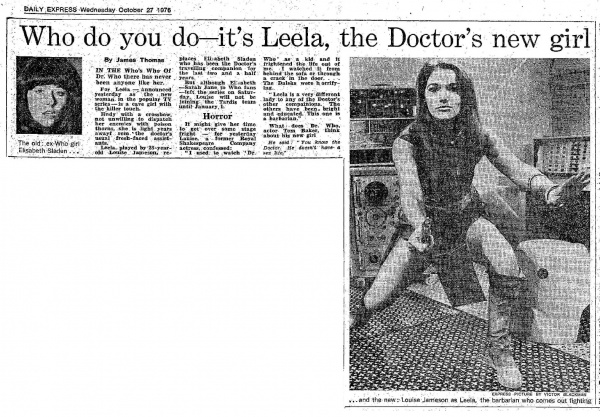 IN THE Who's Who Of Dr. Who there has never been anyone like her.

For Leela -- announced yesterday as the new woman in the popular TV series -- is a cave girl with the killer touch.

Hndy with a crossbow, not unwilling to dispatch her enemies with poison thorns, she is light years away from the doctor's usual fresh-faced assistants.

Leela, played by 25-year-old Louise Jameson, replaces Elisabeth Sladen who has been the Doctor's travelling, companion for the last, two and a half years.

But although Elisabeth -- Sarah Jane to Who fans —- left the series on Saturday, Louise will not be joining the Tardis team until January 1.

If might give her time to get over some stage fright for yesterday Lausie, a former Royal Shakespeare Company actress, confessed:

"I used to watch Who as a kid and it frightened the life out of me. I watched it from behind the sofa or through a crack in the door.... The Daleks were horrifying.

"Leela is a very different lady to any of the Doctor's other compainions. The others have been, bright and educated: This one is a barbarian."

What does Dr. Who, actor Tom Baker, think about his new girl

He said : "You know the Doctor. He doesn't have a sex life."

...and the new: Louise Jameson as Leela, the barbarian who comes out fighting