Who do you want next? 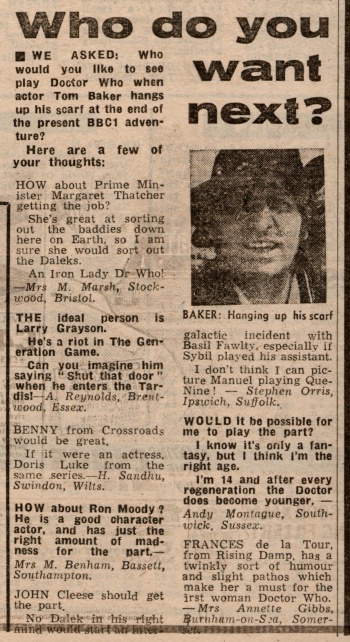 WE ASKED: Who would you like to see play Doctor Who when actor Tom Baker hangs up his scarf at the end of the present BBC1 adventure?

Here are a few of your thoughts:

HOW about Prime Minister Margaret Thatcher getting the job?

She's great at sorting out the baddies down here on Earth, so I am sure she would sort out the Daleks.

He's a riot in The Generation Game.

Can you imagine him saying " Shut that door " when he enters the Tardis!---A. Reynolds, Brentwood, Essex.

BENNY from Crossroads would be great.

If it were an actress, Doris Luke from the same series.—H. Sandhu, Swindon, Wilts.

HOW about Ron Moody ? He is a good character actor, and has just the right amount of madness for the part.—Mrs M. Benham, Bassett, Southampton.

JOHN Cleese should get the part,

No Dalek in his right mind would start and intergalactic incident with Basil Fawlty, especially if Sybil played his assistant.

WOULD it he possible for me to play the part?

I know it's only a fantasy, but I think I'm the right age.

I'm 14 and after every regeneration the Doctor does become younger. — Andy Montague, Southwick, Sussex.

FRANCES de la Tour, from Rising Damp, has a twinkly sort of humour and slight pathos which make her a must for the first woman Doctor Who. —Mrs Annette Gibbs, urlih.ant-on-S2a, Somerset

Caption BAKER: Hanging up his scarf