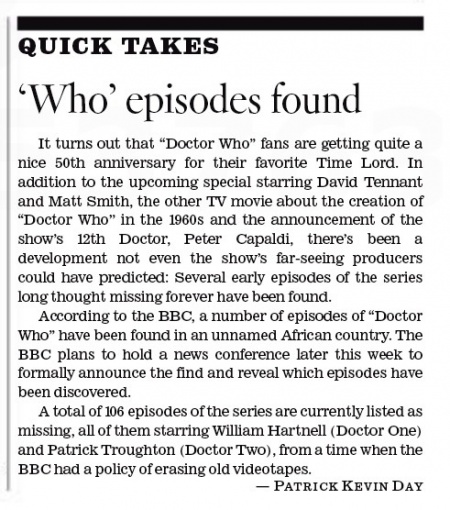 It turns out that "Doctor Who" fans are getting quite a nice 50th anniversary for their favorite Time Lord. In addition to the upcoming special starring David Tennant and Matt Smith, the other TV movie about the creation of "Doctor Who" in the 1960s and the announcement of the show's 12th Doctor, Peter Capaldi, there's been a development not even the show's far-seeing producers could have predicted: Several early episodes of the series long thought missing forever have been found.

According to the BBC, a number of episodes of "Doctor Who" have been found in an unnamed African country. The BBC plans to hold a news conference later this week to formally announce the find and reveal which episodes have been discovered.

A total of 106 episodes of the series are currently listed as missing, all of them starring William Hartnell (Doctor One) and Patrick Troughton (Doctor Two), from a time when the BBC had a policy of erasing old videotapes.