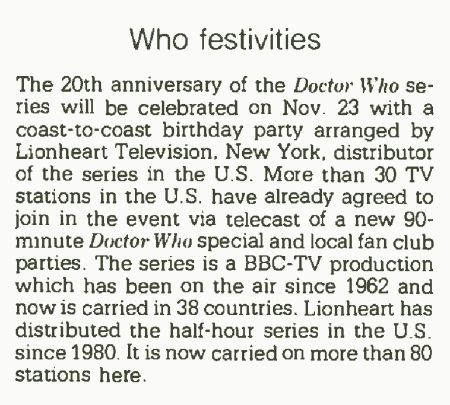 The 20th anniversary of the Doctor Who series will be celebrated on Nov. 23 with a coast-to-coast birthday party arranged by Lionheart Television. New York, distributor of the series in the U.S. More than 30 TV stations in the U.S. have already agreed to join in the event via telecast of a new 90-minute Doctor Who special and local fan club parties. The series is a BBC-TV production which has been on the air since 1962 and now is carried in 38 countries. Lionheart has distributed the half-hour series in the U.S. since 1980. It is now carried on more than 80 stations here.