Who is a good doctor 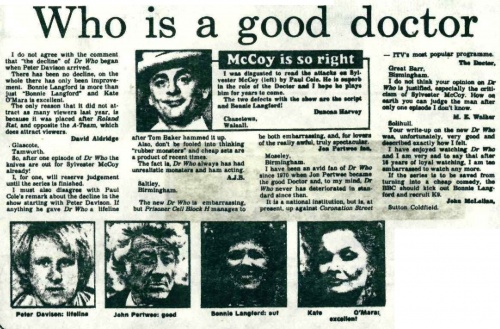 I do not agree with the comment that the decline of Dr Who began when Peter Davison arrived.

There has been no decline, on the whole there has only been improvement. Bonnie Langford is more than just "Bonnie Langford" and Kate O'Mara is excellent.

But the only reason that it did not attract as many viewers last year, is because it was placed after Roland Rat and opposite The A-Team, which does attract viewers

So, after one episode of Dr Who the knives are out for Sylvester McCoy already!

But I, for one, will reserve judgment until the series is finished.

But I must also disagree with Paul Cole's remark about the decline in the show starting with Peter Davison. If anything he gave Dr Who a lifeline after Tom Baker hammed it up.

Also, don't be fooled into thinking rubber monsters and cheap sets are a product of recent times.

The fact is, Dr Who has always had unrealistic monsters and ham acting.

If the new Dr Who is embarrassing but Prisoner Cell Block Hh manages to be both embarrassing, and, for lovers of the really awful, truly spectactular.

I have been an avid fan of Dr Who since 1970 when Jon Pertwee became the good Dr. and, to my mind, Dr Who has never deteriorated in standard since then.

It is a national institution, that is, at present, up against Coronation Street -- ITV's most popular programme.

I do not think your opinion on Dr Who is justified, especially the criticism of Sylvester McCoy. How on earth can you judge the man after only one episode I don't know.

You're right up on the new Dr Who was, unfortunately, very good and describe exactly how I felt.

If I have enjoyed watching Dr Who and I am very sad to say that after 16 years of loyal watching, I am too embarrassed to watch any more.

If the series is to be saved from turning into a cheap comedy, But if the BBC should kick out Bonnie Langford and recruit K9

McCoy is so right

That I was disgusted to be the attacks on Sylvester McCoy and left by Paul Cole. He is superb in the role of the Dr. and I hope he plays him for years to come.

But the two defects with the show are the script and Bonnie Langford!